I was in Glendale for all of the wrong reasons, but a good friend was gainfully employed in the vicinity, so we decided to grab a burger for lunch. Glendale boasted a paucity of well-reviewed burger joints, but Gold Star Hamburgers stood out on Yelp with a 4-Star rating. The Yelpers touted good burgers, and Damon Gambuto over at Serious Eats was bullish in his review from a few year ago. Metered parking was easy to find along the street. We ordered at the counter and waited for our cheeseburgers to arrive at the table...about 5 minutes.

The Beef: Meh. The burger patties at Gold Star Hamburgers were typical, average, previously-frozen, thin, bland, chewy, Chuck discs. The beef wasn't bad, it was simply not interesting. It was moderately beefy. The only other note that it carried was a whiff of char from the grill. The beef was a bit dry and slightly rubbery, which was typical of a frozen product. Fat content--20%. Juiciness--none.

The Seasoning: The burgers were just barely seasoned with a moderately salty blend. Nothing special.

The Sear: Meh. What sear?

The Preparation: Our burgers were cooked on a too cool grill to Med-Well. The burger patties were clearly pre-formed and previously frozen.The burgers were only turned once, and this was a plus. The patties weighed in at about 4 ounces.

The Bun: The Gold Star Hamburgers bun was a big, floppy, flat, fresh, sweet, yeasty, seeded, standard burger bun. The bun was not adequately toasted near the center, so it was a little cool. It appeared to have been wiped over a dirty flat top as an afterthought. If the bun had been  crisply toasted and hot, it would have done wonders in terms of texture. And, if a frog had wings, it wouldn't bump its butt when it hopped, broski. "If" didn't happen. 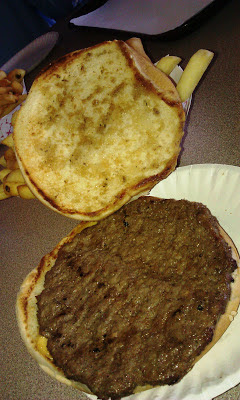 The Fries: The peel-off, thick-cut, previously-frozen, par-cooked fries were fine. They were under-seasoned, but the fries were were hot and crisp.

The Toppings: The Iceberg lettuce and the tomato slice were both fresh.

The Value: It was tough to spend more than 6 bucks on lunch at Gold Star Hamburgers. Our combos--cheeseburger, fries, and a drink were about that. The value was fine.

I wasn't sure what others saw that was special about Gold Star Hamburgers, but I was confident that it shouldn't have been the cheeseburgers. The burgers were simply average.