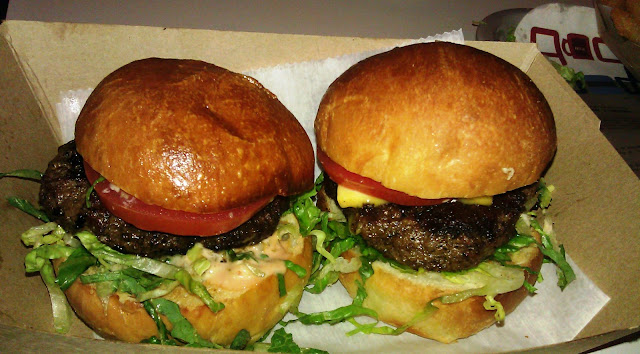 I had about an hour for lunch with the LRP (Lovely Romanian Princess), and Pop Burger was close and convenient. It was about noon, and the place was relatively quiet. We ordered some ridiculously over-priced burgers (over $40 for two lunches) at the window, and we waited about 7 minutes for our orders to come up. I ordered the POP Burgers, and LRP went with a veggie burger.

The Beef: Yawn. I discovered, much to my bemusement, that Pop Burger served mini-burgers. The patties could not have weighed in at more than 2 ounces each. The beef was mild, bland, and only moderately beefy. As for the cuts of beef in the grind...I guessed it was Chuck. The burgers were basically devoid of character. The beef was a little on the chewy side. It was neither greasy nor juicy. The beef was dull. 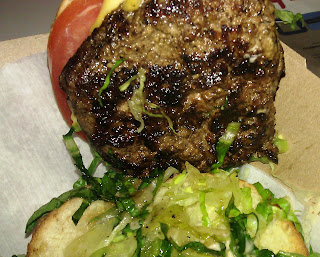 The Seasoning: I detected a faint hint of salt on the exterior of the wee patties, but it was not enough to improve the bland burgers.

The Sear: Pop Burger valiantly attempted to sear the waifish burger patties, but a proper sear would have dried out the patties even further.

The Preparation: Well Done was the only way to get a burger this small. The burgers were so small that each amounted to 2 bites.  The beef was ground at a medium setting. I honestly gave up on these tiny pucks of Chuck. They were so uninteresting that analyzing them was nearly pointless.

The Cheese: Pop Burger provided a mini slice of American cheese to top the teensy burger patties. The cheese was fine, but the burger was just dull. The cheese could not save this lifeless burger.

The Bun: Pop Burger served up its POP Burgers on mini-brioches, which were a day past their prime. The buns were bland, dry, and chewy.  Pass

The Fries: The battered and par-cooked fries at Pop Burger were FAR better than the glorified amuse bouche burgers. The portion was not laughable, and the quality was fine. The fries were golden, crisp, nicely salted, and the crunch of the batter served to balance the creaminess of the centers. 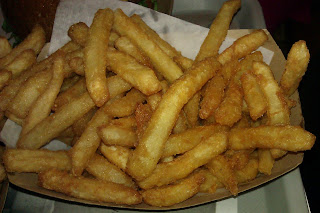 The Toppings: The tomato slices were ripe and flavorful, but the shredded Romaine lettuce was watery. The lettuce served to make a dull burger even more dull.

The Veggie Burger: Woof--this was a $10 breaded and deep-fried slice of portabella mushroom. It was rubbery and greasy. Pass.

The Value: For $9.25, Pop Burger served up 2 miniscule burgers. Each was about 2 bites. When I surveyed my lunch, my initial thought was, "Are you kidding me?"  They were not. A side of fries was $4.25, and that was well over-priced for potatoes, but at least there were more than 4 bites of fries. The value at Pop Burger...it wallowed in weakness.

I was grateful for the company of the LRP, because Pop Burger was a bust, otherwise.

Rating...2 Bites (3 but the Value took this one down a full point)

Posted by Pete Neumann at Saturday, December 24, 2011 No comments: 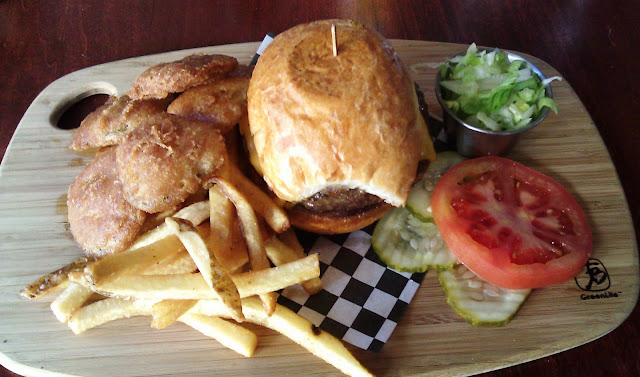 The Burger Kitchen had recently been featured on Kitchen Nightmares. The son, Daniel, had taken over the operation and sent father, Allen, off to do other things. Fat Bruce Lee and I were curious to see if the Gordon Ramsay treatment had delivered or fizzled in terms of burger success.  We walked into a completely empty restaurant at 12:30 PM on a Thursday afternoon in a section of Mid-Town Los Angeles, which was otherwise bustling with foot and vehicle traffic. 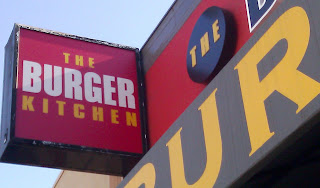 We were quickly seated and handed a couple of shoddily photocopied order sheets,which oddly made no mention of the name of the restaurant on them. The formerly sizable and descriptive The Burger Kitchen menu had been stripped down to a couple of items and a fistful of sides and toppings. We ordered a couple of the 8-ounce beef burgers with American cheese and a couple of sides. Our burgers arrived in about 15 minutes. We did find it especially charming that the manager's girlfriend ran out to her car to get Fat Bruce Lee some Splenda for his iced tea.


The Beef: The burger beef was a combination of 45%, wet-aged Short Rib and 55% Chuck. The fat content was 22%. It was unfortunate that the beef was aggressively over-salted. I was forced to dig into the middle of the patty to determine the flavors. What I discovered was a very competent and tasty burger. The blend delivered a medium note of beef. There was a mild taste of iron. Missing were funk and blood. The beef was juicy and with just enough fat to remind me that it was bad for me...in a good way. The grind was medium. Overall, the beef was better than average, but the seasoning overwhelmed the beef to the point where determining the actual flavors was an academic exercise. 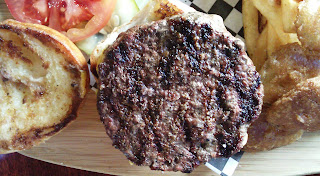 The Seasoning: There is no point in belaboring this.  Curiously, when I brought this up with The Burger Kitchen's manager, he simply thanked me for my input. And so it goes.

The Sear: The crusty sear from the flat-top was no more. What we got instead was a competent sear from a properly hot gas grill. The sear was satisfying and semi-crisp.


The Preparation: The burgers were competently cooked to the requested Medium. The beef was ground in-house, and it was formed into the 8-ounce patties during shift prep. Care was clearly taken not to over-manipulate the beef when creating the burger patties. The bite was firm but tender enough not to be considered chewy.


The Cheese: The Burger Kitchen offered up a nice range of cheese choices (each for an additional $.50): Blue, Goat, Cheddar, Pepper Jack, Swiss, and American. I selected the American cheese. It was perfectly melted, and it provided a desirable creaminess to the bite. The seasoning masked any flavor contributions, which the cheese could have made. 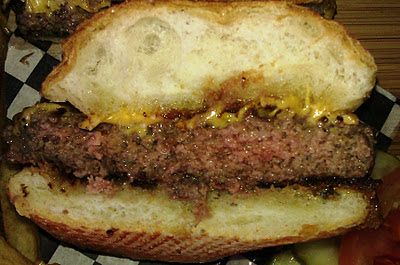 The Bun: The brioche at Burger Kitchen came from Napoleon Bakery AKA Melrose Bakery. The brioche was neutral and surprisingly firm and chewy. This was not unpleasant, but it was very un-brioche-like. The bun was toasted to a satisfying crispness, which lent a nice texture to the bite.


The Meat To Bun Ratio: This was fine.


The Toppings: The shredded Iceberg lettuce was just ok, but it was a little on the wilted side. The tomato slice was hearty and refreshingly ripe.


The Sides: Both the fries and the fried pickle chips were cooked in oil, which was at least a day past its prime. As a result, the fried items tasted a little rancid and more than a little burnt. The pickle chips oozed an unpleasant puddle of oil onto the plate. The fries had a good color, but they were a little on the gummy side. The fries were seasoned with sea salt. 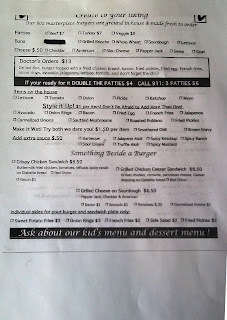 The Value: Had the burger not been salted to death, the value at The Burger Kitchen would have been fine. $7.50 was not a crazy price for a cheeseburger.  Considering the over-seasoning and the burnt-tasting fries, I was not a fan of the value on this visit.


I had watched the episodes of Kitchen Nightmares, which featured The Burger Kitchen, so I understood the unenviable position that Daniel Saffron, owner and manager, found himself in. Sympathy aside, the burger was merely OK, and it was not the sort of thing that I would return for.


Burger Review : The new Burger Kitchen featured a scaled back menu in terms of selection. The burgers and fries both came up lacking in terms of preparation.