A couple of locations in the Denver, CO area 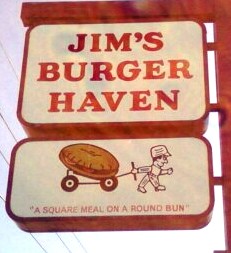 I used to live in Westminster, and I went there once during the moving in process.  I recall not being blown away, but that was years ago, and Jim's BH gets pretty good reviews.  Plus it was sort of on the way to the airport today.

I ordered and in the time that it took to play the second best song in the world* (which was playing) , my double cheese burger and rings were ready.  Note that I asked for them to toast the bun, since this seems to elude all Denver burger establishments. 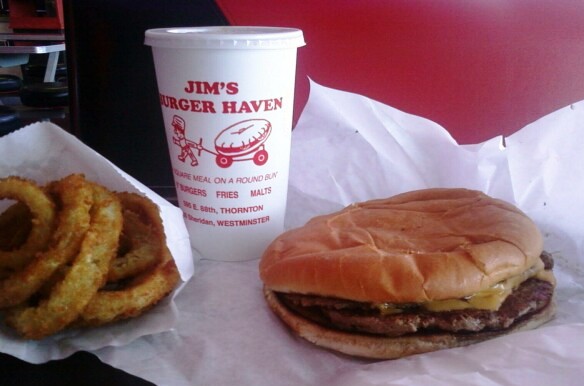 What I got was a splayed hand-sized burger--friggin' huge but oddly flat.  The patties were razor thin.  That meant Well Done, like it or not.  They used double cheese, so it was satisfyingly gooey.  Sadly, they didn't hit it with salt and pepper.  The burger did have a nice iron flavor, which sort of stayed with me, but that was no substitute for proper seasoning.

The fryer oil was stale, so the rings tasted burnt....meh.

Man, if you look at the website, you will note they really are keen on you finding this place and sampling the ONE thing that they pride themselves on having re-invented and perfected--BURGERS.  The following was excerpted from both the menu and the website--yep, a local burger joint has a website, so you're just going to get all giddy with the anticipation of some impending awesomeness.

Secure in the knowledge that this burger was going to be the culinary equivalent of the second coming of keerighst, I brought along three fellow conference attendees to sample the finest, freaking burger in the fair city of Denver.

The Wind Up...............The service was spotty. The AC was doing a poor job. The booth seats were wet from the recent wipe down. There were pieces of food on my fork. The waitress actually told us that she forgot about us midway through the meal.  All these things were service related and, therefore, of no consequence since an amazing burger was sure as hell going to overshadow all of these trifles.  There was just no way that they could have been full of crap, right?


The Pitch..................The burger arrived with a marvelous, griddled sear, but it came out an overcooked Medium--I ordered Med-Rare...Strike One.
The meat was juicy, and it was properly aged to deliver a nice front note of the good stuff. Quality beef--maybe they were on to something. 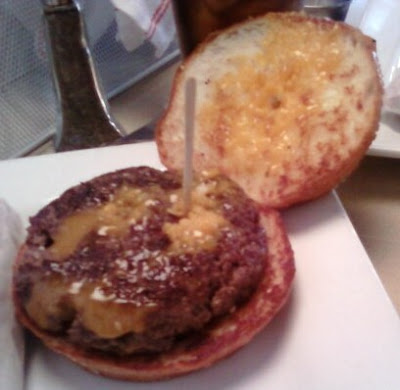 The massive bun was toasted--but in a mild, lackluster way that provided no shift in texture or flavor, but they sort of tried.  Did I mention that the bun was massive?  The bun was massive, so the meat to bun ratio was all wrong. Strike Two.

The meat was freshly ground and formed ever so gently so that all of those sticky proteins in the medium grind minded their own damn business and did not form a rubbery mess....good for HBurger.


The Seasoning--The meat was bland, bland, bland.  Say it with me...."Salt and effing pepper."   As a result, the burger had no middle or end note.  It was a one-note wonder. No umami notes were present.  BORING. Strike Three

Looking back--I suppose HBurger's menu and/or website never touted any modicum of competence in terms of preparation.  They merely stated that they had good ingredients, and that those ingredients would find their way into your food hole. This burger would have been good if a little care were taken, and the chef and management took the time to run both the front and the back of the house. That said--screw 'em for turning out a mediocre product.

Burger Review --  The H in Hburger stands for HALF-ASSED and/or HYPE. It was a lousy value and a bad experience.

Rating...1 Bite.  It would have been 2 bites on the merit of the ingredients, but the quality of the preparation dragged this into the basement.

Another day in Denver, and the need to choke down another burger.  As luck would have it, the hotel, which was housing my conference, looked to have a passable burger in the lobby bar, and that same kitchen served Altitude.

Shockingly, this burger did not suck. 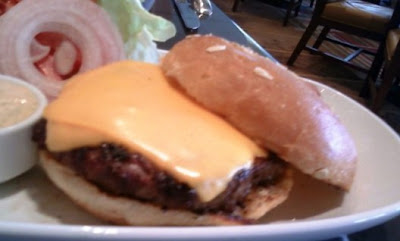 The Burger Breakdown...
Burger Review : this was the best burger that I have had in Denver.

It's a franchise, so you can find it in various cities.
Earl's Restaurant and Bar Website

I was in Denver, and I was faced with a burger wasteland.  I lived here before, and the best anyone could come up with was the GD Cherry Cricket, which is weak.  The St. Julian in Boulder was too far, so Earl's it was. 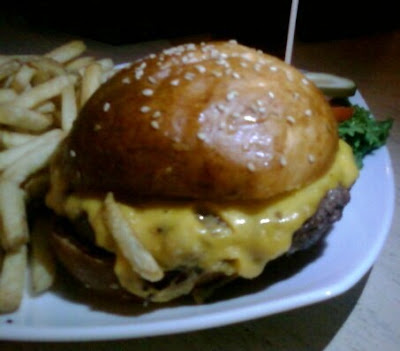 The service--just pig awful slow.  So what, this ain't ServiceBusters, but I'm just sayin'.

The burger was a bit of a surprise. Not aged, so no funky front note of awesomeness, but the sear was fine, and the seasoning was there.  The bun was not toasted, so loss of points for texture.  The bun did not overwhelm the juicy patty, so it didn't wreck the thing.

This was by no means an excellent burger, but it was a competent burger.

I took Happy Meal whale watching in Long Beach--I was still trying to shame him into buying me that World's Greatest Dad coffee mug, but the little man was really making me jump through all of the hoops. Anyway, I'll be damned if whale watching didn't create a powerful hunger.  The lad selected Boston's the Gourmet Pizza.  They claim to serve a lot of amazing food, and the waitress sang the praises of the burger.  Ir was later that I realized I should have asked her about recent head trauma....sigh.

The menu (LIAR) claimed that I was about to enjoy a half pound of juicy, Angus beef.  Sadly, the pre-formed, thin patty was served a scorched Well Done, so any juiciness was consumed in the angry flames of their grill under the tender ministrations of a kitchen staff too busy to prepare food worth trying more than once.

Dry-dry-dry burger on a dry-dry-dry bun.  Frankly, the flavor was sort of there, but the execution was LACKING. Dijon mustard?---NO!--Boston's is a gourmet establishment, so they only serve that fine, yellow stuff in a squeeze bottle and you, good sir, are an idiot for even asking.  I do not think that gourmet meant what they thought it meant.

Burger Review -- Shame of them for charging ten bucks for a dust bunny.

The Tavern on Main--El Segundo

That's right, EL SEGUNDO, mothereffers!  Queue up the Sanford and Son music, because The BurgerBusters go to where the burgers are. 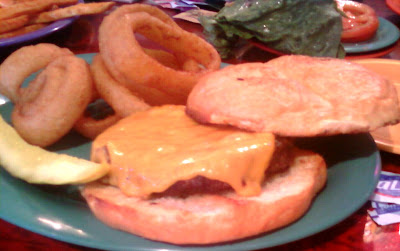 Fluffy ciabatta-ish roll--toasted--not buttered--WIN.  The burger--sort of, kind of..cooked right on a grill. Not seasoned, not really flavorful enough...mostly I got a smoky flavor from the char, which was OK. It was not a greasy burger, so it was not a disaster.  Burger:Bun ratio was skewed in the wrong direction, too.

It was just ok-- not great, but it didn't suck enough to warrant a tirade.

Burger Review --  Meh....I guess if you're in El Segundo you could go to The Tavern on Main--I wouldn't but, I guess you could.