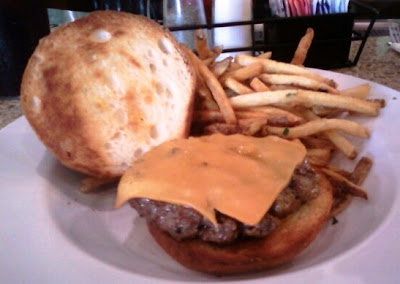 Eureka!Burger got all the great press for the best burger in the Redlands...San Bernadino area.  Even the signage promised "Gourmet Burgers and Craft Beer."

The smell, as I approached this place, was amazing--it smelled like a restaurant that made a great cheeseburger. That smell continued within as I approached my table, so I was looking forward to something tasty.

Me: Please bring me some brown or Dijon mustard.
Waiter: Uh..all we have is Grey Poupon
Me: *sigh* That'll do.

Read that Grey Poupon bottle...it was emblazoned with the word "Dijon."

That should have been my queue to walk out, but it was 103 in Redlands, and I couldn't bear another walk from parking lot to new place on a day that was 30 degrees hotter in that locale than in LA.

The Meat:  GREASY--I have to assume that it was a 70:30 blend gauging by the grease that I was continually wiping from my lips and was oozing from the patty.  The menu touted burgers made from Angus chuck.  One can only assume that the "g" in "Angus" was a typo, because this thing tasted like what I imagined ground up bungholes would--BLAND.  I confirmed that they got their meat pre-ground from their supplier. The grind was way too fine. Finally, they must have left it at a preschool for a week and let the kiddies use it as PlayDoh, because it was freaking rubbery in a way that suggested prolonged and excessive handling by an amateur, back-of-house staff. Clearly, if they couldn't grind their own meat, they had no business hawking "gourmet" burgers.  P.S. Chuck would have been fine for a backyard BBQ, but since they were touting and charging for premium produces, then it would have made sense to sell a premium product.

Seasoning: NONE--NOTHING...NOT A DAMN THING.  I wonder if I forgot to asked to be up-charged for salt and pepper... It was like chewing rubbery, greasy water. It was Apple Pan all over again. I've had more interesting shredded daikon radish. 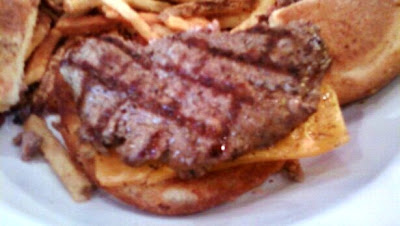 The Sear: Nah--nothing but weak grill marks on a rubbery patty.
Preparation:  Grilled not griddled to Medium rather than the Med-Rare that I ordered. I confirmed that they actually had a griddle in the kitchen, which would have at least imparted a sear to the burger patty rather than the uneven grill marks pictured here. WEAK.
The Cheese: The American slice that cost me the extra buck was stale and dried out, so it really didn't melt, and it was rubbery. The pictures demonstrate how rigid the cheese remained.  BLEAK
The Bun: unevenly toasted and incredibly bland.  The menu claims that it a "...Locally, Fresh Baked" brioche.  Not a hint of butter or sweetness. Really just a big, dry sponge. Too much bun for the small patty. Their baker gave them a bad product, and Eureka!Burger made it worse.
The Meat To Bun Ratio: It was impossible to care--both meat and bun were unpalatable--they sort of deserved one another.
The Fries: The fries were barely warm, and they were lank and bitter.


The Value: While this awful burger was mercifully small--at 9 bucks (cheese was an extra buck...c'mon) it was a real ripoff, but since it was inedible, it was a scam at any price. I was only capable of powering through half of this one. It was most unpleasant.


"Eureka" means "I have found it." In this case, it meant "I have found a truly awful burger in Redlands, CA." Eureka!Burger had found a groove, though. They managed to succeed, and in a mighty way, at taking mediocre ingredients and making them worse. The burger was a case of 4 plus 4 being forced to equal 2. 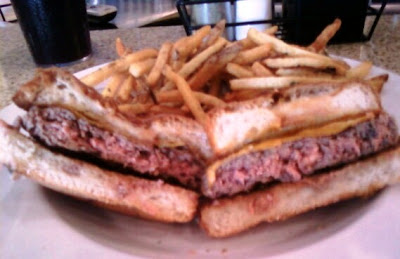 It took much nerve to be a joint that posted its press on its walls and on it's website. That hubris would only have been justified had they backed up the hype with a quality product. Eureka!Burger FAILED to live up to the hype and delivered a cheeseburger of remarkably poor flavor/quality. I couldn't finish this nasty, grease sponge. It took a lot of nerve to serve a burger, which looked NOTHING like the burger porn photos on their site. Those burgers looked good--thick, seared, and of a size that matched the bun. Yuck!Burger would have been a more apt name.I would have also accepted Bait and Switch!Burger, but Yuck!Burger...just easier to say.

Burger Review :  Really, really far from gourmet. In all fairness there was an upside--that greasy monstrosity of a cheeseburger packed a wallop as a laxative...4 visits to the porcelain in 18 hours.  It made for an interesting drive back to LA. I could feel the bolus of grease as it made its way through my system.