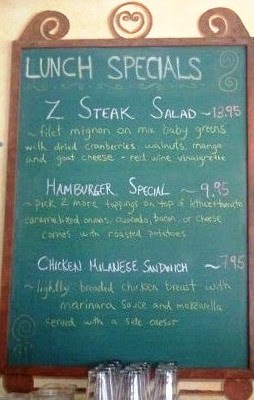 But please don't, just don't go here, not for a burger and certainly not for juice.


Zabie's is located a block from The Counter--I should have gone to The Counter.

I took Happy Meal (the youngster) to Zabie's after washing the car and seeing Despicable Me......for the second time....*sigh*

It was 2:00 PM on a Saturday, so the place was empty except for some guy and his creepy, ginger kid that would not stop eyeballing me, WTF?

Happy Meal ordered a freshly squeezed apple juice, and to his dismay, the fruit fly covered juicer delivered a pulpy, orange, opaque liquid that tasted strongly or carrots. When I mentioned this to the proprietress, she informed me that they NEVER clean out the juicer. BLEH.  We got him some lemonade instead and passed on the drippings that filtered through what was presumably an unholy melange of composting vegetation being jealously guarded by a legion of drosophila.

The special board was merely a reiteration of 3 menu items....verbatim...at the same price listed in the menu.  I do not think that "special" meant what they thought it meant.

We ordered two of their 10 dollar Angus burgers with Jack cheese. They came out Med Well, which was BS considering we asked for Medium,. but we didn't want to wait an additional 20 minutes for a re-fire. That was a good call, since the burgers would not have improved at a commensurate level to the added wait time. 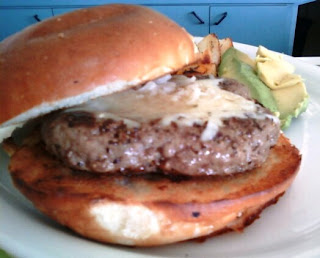 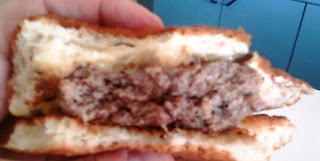 You know who eats cheeseburgers like this?  Terrorists, that's who.  Terrorist training camps feed the trainees nothing but Zabie's burgers and tell the recruits that this is what America is all about.  No wonder they hate us so much.  It was that I could do to stop myself from loading up on fertilizer and gasoline after choking down that bone dry monstrosity of a cheeseburger.  Happy Meal couldn't even finish his (above), and that boy can EAT.  I had to start him on an IV of saline and Ringer's lactate in the car just to rehydrate him.

Burger Review : Eff and No