Today's burger outing took us to Koreatown in Los Angeles to sample the new Yelp superstar cheeseburger at Kalbi--It's been #1 on Yelp for a month--163 reviews and counting at the time of this post. 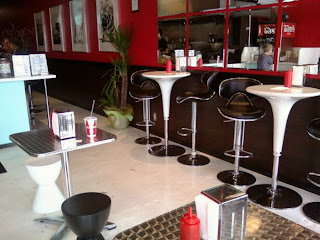 Kalbi was in a little strip mall, and I couldn't tell you what was next to it, since the signs were not in a language that I couldn't read. The interior was spotless and lot like a diner from the Jetsons.

Kalbi/Galbi refers the style of Korean dishes prepared using rib meat, which is marinated in a mild mixture of soy, garlic, and sugar. The traditional version has a distinct flavor, which is particularly ill-suited in its sweetness for burgers.

Initially, I only ordered a plain Angus cheeseburger, $6.45, but after speaking with the very polite and knowledgeable young woman at the counter, I added the signature Kalbi Burger, $8.45, to my order, since that  promised to be a more interesting blend. Seriously, the staff was a pleasure to talk to. Everyone, and there were 4 of them in the small cooking and assembly area, was very pleasant and helpful. I have never encountered a staff that was so well informed about their product outside of Umami Burger. As we were packing up to leave, the owner, Hawk, even stopped by to see if I had additional questions. 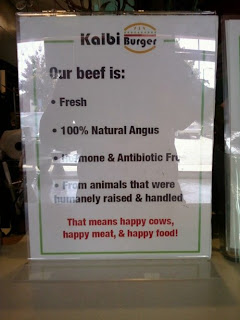 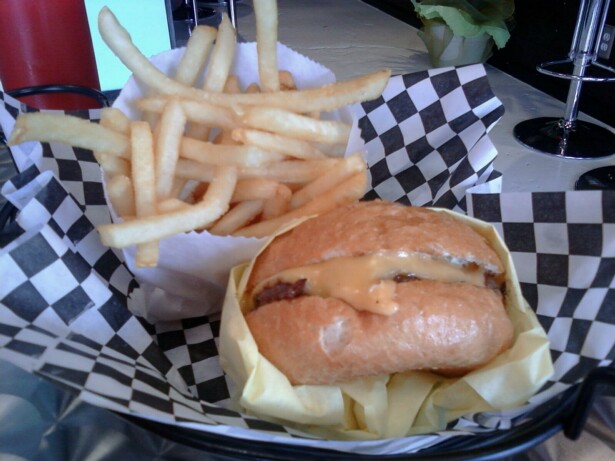 The Value...Kalbi Burger served up generous portions, but is simply wasn't good enough.

At the time of this review, Kalbi had only recently opened. I imagined that they were still ironing out the kinks.  This was a very precise and technically proficient burger in terms of preparation and assembly. Perhaps it catered to a regional taste, which I did not share. Were Kalbi Burger to swap out the cheese and get with the salt and pepper--hell, a little Korean soy in the grind would probably kick it up a couple of notches--then I could see this becoming something truly remarkable. The irreplaceable elements of passion and care were already in place. Frankly, all of the Korean patrons seemed very happy with their food, and Kalbi Burger may have chosen to serve that market. I didn't think to ask the owner about his target market, but due to it's Koreatown location, one could assume that the burger was tailored to Korean tastes.

Burger Review :  A precise, freshman effort, which may mature into a solid win if they choose to manage the flavor profile to an American palette--the skill was there, but the ingredients failed the test. At the time of this review, the cheeseburger had a long way to go to earn repeat business.