After 4 hours, we were hungry, and we made the journey to a newish spot, Burger Kitchen, to bust some cheeseburgers.
If I were a stickler for service, I would have flamed this joint without a second thought, and it would have looked something like this: 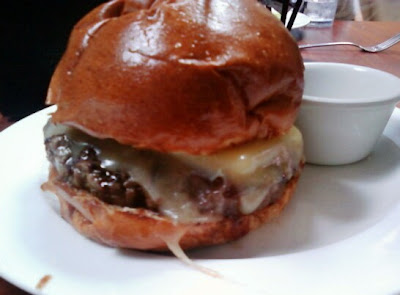 OK, you get the point--the service was disorganized.  How about that burger?  Funny thing...This burger flirted with excellence in spite of  the fumbling staff and some quality control/back-of-house issues. 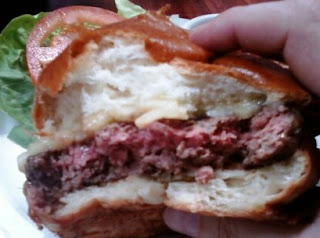 Given a year to settle in and work out the service and quality kinks, Burger Kitchen this may evolve into a top-notch burger establishment.  I mean, it better, since burgers constituted 90% of the menu items.  I do not plan to spend money/time there again until the nonsense gets resolved in terms of service.
Burger Review : Excellent in terms of flavor, but one needs great patience to look past the blemishes . If they are able to grow past some serious service issues and a couple of quality kinks, Burger Kitchen may be worthy of a second review.

Rating...4 Bites  really 3 1/2 Bites, because of the staleness of the bun and the connective tissue in the beef.

The skewers are now dry.
The have organized the dining area into sections, and they now assign servers to those sections.
They have created a better ordering plan to insure that ingredients are on hand.
They have a new inventory and portion control system.
I will re-review, since the burger fundamentals of sear, seasoning, grind, blend, etc. were all in place.