Tired of the same old food choices, this Burger Buster decided to bust all the burgers near his office in Naples, FL. I decided to start with the top of the food chain (no pun intended?) with Lulu B's, winner of the prestigious "Best Burger in Naples" award from the Naples Daily News. We of the Burger Busters' Brotherhood know better than to trust awards from the media. Even more doubtful is the people's choice award, where mere mortals get to cast their votes for the likes of Wendy's and Chili's. 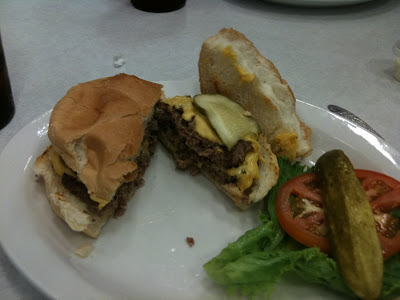 I am pleased to report that Lulu B's breaks the trend of awards going to bad restaurants. In fact, your humble author may have had his faith renewed in the principle of the wisdom of crowds. The folks at Lulu B's lived up to their billing and then some. The restaurant was a 50's-styled diner, nestled in the middle of a nondescript shopping plaza on US 41. I will admit to feeling the temptation of straying from my mission and sampling some of their other fine-looking options (like the pot roast melt. What could possibly be wrong with that?), but you will be comforted to know that I forged ahead and ordered my burger. It was a classic diner burger, griddle cooked Medium Well, although the patties -- yes, that's pattIES... I ordered the double, as I did not become fat by accident -- are a bit thicker than you would normally find. Regardless, the meat had a very nice sear and was perfectly juicy. The bun was quite tasty, with a nice consistency, with my lone criticism being a burger:bun ratio that skewed a bit too much toward "bun."
After one bite, my visual critique became a distant memory. This would be a very good cheeseburger anywhere. In an area like Southwest Florida, it's almost criminal for food to be this good. The meat was nicely aged and perfectly seasoned. The textures of the meat, cheese, and bun were in nearly perfect harmony.
Burger Review : After speaking with the proprietor of the establishment, it was apparent that they take great pride in their burgers. It is with good reason, as it is a food at which they excel at Lulu B's. If you find yourself stuck in Naples, you can at least take comfort in a good cheeseburger.