No address is given, because I do not want anyone to find it.
Website 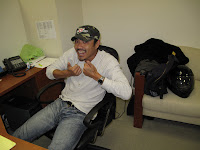 I hadn't ventured into Father's Office for years, but I recalled the burger as being abhorrent...my recollection was correct. This time Fat Bruce Lee and I went to the Culver City location, and found that, if nothing else, Father's Office was consistent. I would not have returned ever again based upon that first experience, but these d-bags (pictured) swore up and down that Father's Office made an amazing burger. It's our job to choke down the worst so that our readers don't have to, so we bravely allowed gustatory history to repeat itself.

It was as if Father's Office set out to make a colossally awful cheeseburger, but then they just effortlessly vaulted over that bar to produce something truly egregious. The complexity and thoroughness with which this meal went wrong would require a white board to really show all of the ways that this was awful, but I will do my best. We know that this review does not reflect what many may feel about this place, but it is an honest and accurate description of our experience.

1. They did not let me order the burger with less stuff on it. It came with caramelized onions, a blend of cheeses, and arugula.  Yep, I didn't attempt to substitute anything.  I asked to simply leave stuff off to avoid wasting those ingredients.  As a result, those ingredients (onions and arugula went straight to the trash. I get that they don't want substitutions, but this was actually asking to do less.
1.a. Caramelized onions were sweet, slimy, and greasy. GROSS
1.b. Arugula....a bitter green. WHY?
2. I did enjoy a scene at the bar where a woman was rebuffed for attempting to order a drink containing vodka. She was condescendingly informed that Father's Office does not stock vodka at the bar. They knew what was good, and it wasn't vodka. The bartender actually chastised her for ordering something as flavorless as vodka. Comedy.
3. The fries showed up at least 10 minutes before our burgers. I recalled ordering a burger with fries rather than fries and then a burger.
4. The fries came with tartar sauce. Well, aioli,, but aioli, which most closely resembled tartar sauce--unpleasantly oily tartar sauce.
5. I asked for ketchup, and I was told that they do not have ketchup-- Neat....greasy, shoestring fries dipped in a thick, oily sauce.
6. The burgers were served on crusty rolls, which were slathered in butter.....greasy. Without the extra fat, these would have been OK.
7. The burgers were ground Sirloin--a fine start.  The burgers were seared on a griddle--excellent......but then they were either braised or held in a steam table, which saturated the crust and contained the rare interior of the burger in a 3/16 of an inch, rubbery rind of grayish meat and waterlogged sear. It made for an unpleasant mouth feel.
8. This also served to preserve all of the liquid fat inside of the burger, so when I bit into it, it leaked/squirted grease into my mouth. That coupled with the really oily, Bleu/Gruyere cheese blend on top of the burger, and I had a greasy mess on my hands. Frankly, the only thing that kept this abomination from soaking my hands up to the wrists in grease was the hard crust of the roll.
9. The beef was dry-aged Angus, so it had a nice funk to it, but it needed savory seasonings or condiments to overcome the sweet residue of the onions and the braise (or whatever it was they did to wreck the outside).
10. Speaking of which, don't bother requesting mustard and salt--they didn't have mustard--the salt...I waited 5 minutes, for it to be grudgingly be dropped off in a plastic condiment cup rather than a proper ramekin.
11. They were not busy--only 1/3 full, but the service was not only dismissive, but it was also incredibly inattentive--not one person was remotely curious as to the quality of the food......It brought to mind the first bar scene in Desperado:
Short Bartender: What do you want?
Buscemi: Beer.
Short Bartender: All I got is piss-warm Chango.

Bitter, slimy, greasy, sweet, bland, and rubbery are not things associated with a good burger--these are things that you might find in a diaper. These were all things associated with the Father's Office cheeseburger. This was a lousy, excuse for a burger. Honestly, the only reason that I did not purge that abhorrent thing was due to the fact that I did not want to taste it twice.

They might as well have called this place "Father Knows Best", because they were obnoxious and recalcitrant regarding the accommodation of any requests, and they stubbornly put out a consistently awful product. Chef Sang Yoon was behind this burgerpocalypse. What boggled (and continues to do so) my mind was that the citizens of Los Angeles continued to eat and crow about this pile of greasy crap. At the time of this posting, and well past that, there was a discussion board on ChowHound.com where they actually defended this outhouse on a bun.

Sadly, this father--Chef Yoon--was an obnoxious hack who put style above substance and delivered a miserable dining experience and a pig awful cheeseburger. Amazingly, Father's Office managed to screw up ground sirloin--it took a real effort to turn that into garbage.