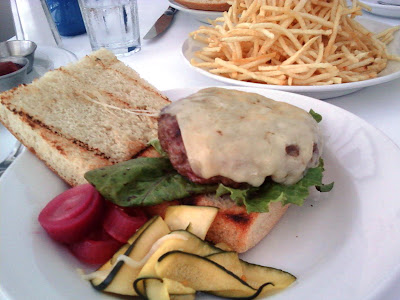 It had been a crappy couple of burger days in San Francisco when Tess of the B'Urgervilles and I went to the much lauded Zuni Cafe for their signature, house-ground burgers.  Keep in mind that this cheeseburger was served on GD focaccia, so one can imagine the gustatory hell that we were about to enter.  The burger was 17 bucks, and the cheese (something snooty in the White Cheddar family) was an additional $1.75......dicks.  Ready...Set...Terrible!

The burger arrived and looked fine until it was flipped over to reveal a cool, grill treatment, so it had weak sear marks and a rubbery crust.  The focaccia (rosemary) was oddly lacking both rosemary and the customary, slightly chewy and firm texture--it was more like cornbread. 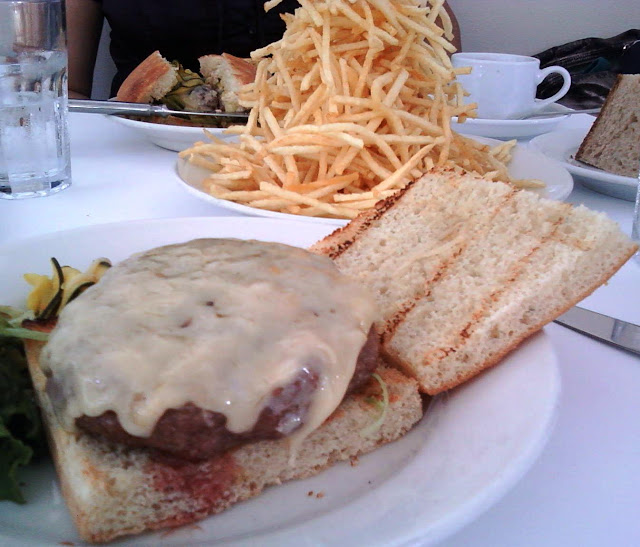 Bite five--there was no bite five.

I have failed--I could not choke this one down.  However, I consider myself a survivor of the single worst burger that I have ever tried.  It was a crapcake--and that was actually insulting to cakes of crap everywhere. 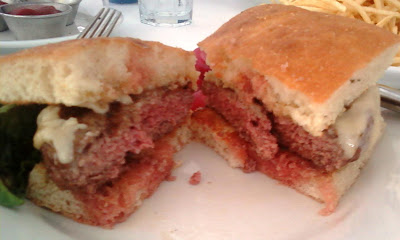 The grind was fine as polenta, and the flavor was pure, fishy skank.  It was also remarkably firm, which suggested that they took puréed ground round, added dashinomoto (bonito flakes) or fish food, and an egg--whizzed it up in a food processor while going out back to smoke, and then caught up with an old friend for ten minutes before realizing the mixture was nearly liquefied, and then saying "eff it, let's serve it anyway." The cooked burger ended up being a meatloaf made with Gerber baby food with the flavor of overly "ripe" salmon. I assume that they did not bother trimming the beef deeply enough and handed us a burger made from the bacteria-rich rind of the dry-aged beef.

The mouth feel was ghastly--mealy, vaguely toasted focaccia sandwiching mealy "beef" with a greasy wad of salty cheese.  More sadly, the dubious focaccia dutifully soaked up the fishy drippings to deliver a bite of something resembling a soggy, carp-flavored brownie.

The waitress sheepishly hustled away the plates of 2/3rds consumed burgers and brought us a dessert menu to cleanse our palettes.  The strawberry sorbet was bright, sunny, and bursting with fruit flavor, and the peach meringata dish was a work of genius from the dual perspectives of texture and flavor.  That meant that someone in the Zuni Cafe kitchen was worth a damn, but it certainly was not the guy on the grill.

In all fairness, the burgers were removed from the tab. There were other patrons in the restaurant that were not revolted by similar looking burgers, which suggests that either we got a bad batch or that the other patrons were OK with the food.

Burger Review : Astonishingly bad. Tee up Destiny's Child's I'm a Survivor, and just walk the other way.  You really, really don't want to know.  I could still taste it 24 hours later.