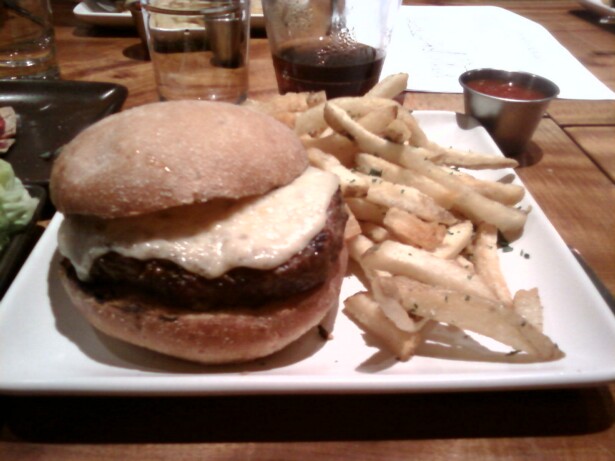 At the urging of a fellow burger aficionado, Colonel Mustard, myself, and a small army went to Mission Beach Cafe to sample the burger.

Upon entering the restaurant, the smokey smell of BBQ was surely a sign of delicious things to come, right?

The waiter seemed pleased and proud to state that the burger at his cafe was rated #4 in San Francisco.  Who the eff goes around chanting, "We're number 4--We're number 4"?  That's not even good enough to make it to the podium.  Runner-up status is nothing to crow about.

Now take a look at these ingredients.  Maybe the bar was set so high in San Francisco that this assemblage of culinary excellence wasn't enough to make the grade.

This was a surefire recipe for awesomeness--the very best ingredients were sourced, and it would have merely taken a competent effort to assemble the awesome parts into a more awesome whole.

And..........here we go.  It would seem that the theme of the Mission Beach Cafe cheeseburger was Green--Ed Begley, Jr would have been proud.

The "Key Lime Pie"....not so much. It's a fine lemon curd pie, but Key Lime it is not. The used gelatin to set the filling, and it lacked the traditional graham cracker crust.  Ooof.

Burger Review : Meh  Great ingredients are nothing in the face of a concerted effort to minimize their impact.  #4 was probably generous.  Sometimes, the whole is less than sum of its parts.  It is fair to hold out hope for this burger, however.  The beef and seasoning, which are the cornerstone of a great burger, were dead on.