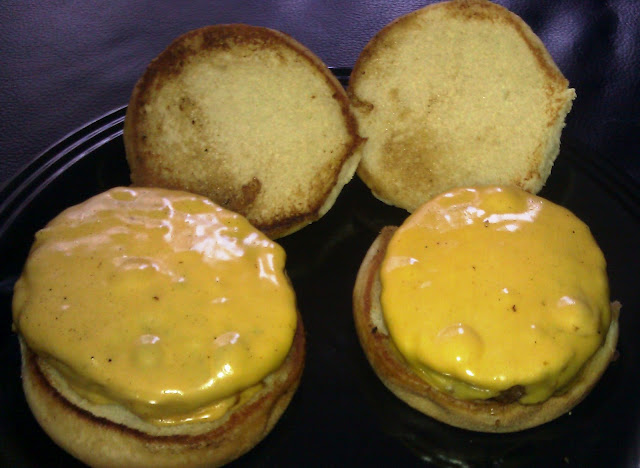 This will not be a standard review since this was not a restaurant experience, but I will strive to stick to the format.

A representative from Omaha Steaks recently contacted me to see if I would review their burgers. I jumped at the chance. Omaha Steaks graciously offered to send out a box of assorted meats, including 4 of their 4-ounce burgers. I was delighted to take them up on this offer. I you have never taken delivery of a box from Omaha Steaks, then you have not lived, brother. The shipment arrived in a thick, styrofoam cooler. The assorted meats were sealed in blister packs, boxed, and it were kept frozen with a sizable chunk of dry ice. The dry ice, naturally, was dropped (using tongs) into the toilet to turn Happy Meal's bathroom into a pre-Halloween haunted lavatory..you probably shouldn't do this. It was pretty cool, though. 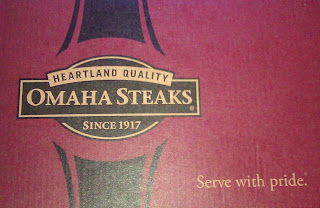 The Beef: For this review, Omaha Steaks provided their standard, 4-ounce burgers. I assumed that the burger meat was Chuck. The beef was really quite flavorful, and that was surprising for a frozen product. The burger meat was beefy with notes of iron, funk, and minerals. It was nearly on par with the Niman Ranch beef that we had previously enjoyed at Super Duper in San Francisco, CA. The fat content was high, but much of that fat rendered off during the cooking process. I estimated that the fat netted out to about 20%. The beef was also very juicy. It must have been flash frozen, because the juices didn't leak out of the meat as it cooked. Beyond that, the bite was tender. Solid beef!

The Seasoning: I applied a 1:1 mixture (by volume) of kosher salt flakes and ground pepper. This was all that the beef required to amplify its well-balanced flavors.

The Sear: The sear was crisp and dark. It could have been a little deeper, but I was cooking in an apartment, and I didn't want to set off the smoke alarm. The salt and pepper combined nicely with the seared burger meat. 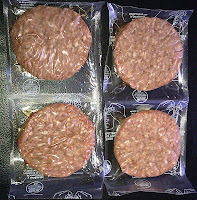 The Preparation: The coarsely ground beef arrived in pre-formed patties. The bite was tender enough to indicate that Omaha Steaks knew what they were doing when it came to burgers. I started the burgers in a toaster oven, which was set to broil at a temperature of 450 degrees. I let them cook for about 5 minutes to bring them up to Med-Rare. From there I transferred them to a cast-iron pan, which I had coated with peanut oil and brought up to the smoke point (also 450 degrees) over a gas flame. I let the burgers cook for about one minute on each side. The burgers came out to moist Medium.

The Cheese: I used standard American Cheese from Costco. The trick to melting cheese without over-cooking the burgers was to wait until the burgers had 30 seconds to go...apply the cheese slices...cover the pan with a lid...wait thirty seconds for the cheese to melt in the rapidly developing steam...uncover for 10 seconds...transfer to waiting, toasted bun. The cheese was perfectly melted and just right for the juicy burgers.

The Bun: Due to the small size of the Omaha Steaks burgers, I had limited choices in terms of burger buns. I went with small burger buns from Safeway Kitchens. These were fresh, sweet, a little yeasty, and they toasted up nicely. 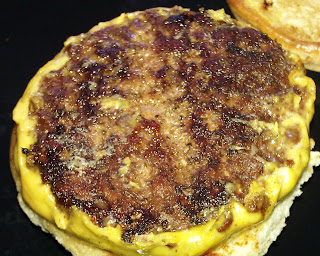 The Meat To Bun Ratio: The small bun was a perfect match for the 4-ounce burgers.

Value: At the time of this review, one could order 12 of these burger patties for $19.99 (plus shipping). That was about $1.67/for each burger patty, and that was a really good value.

Burger Review : Omaha Steaks provided a high-quality burger patty for a really good price. If you have some moderate kitchen skills, then this is a great burger to have on standby to impress you friends with. Happy Meal and The Marinater were both pleased.