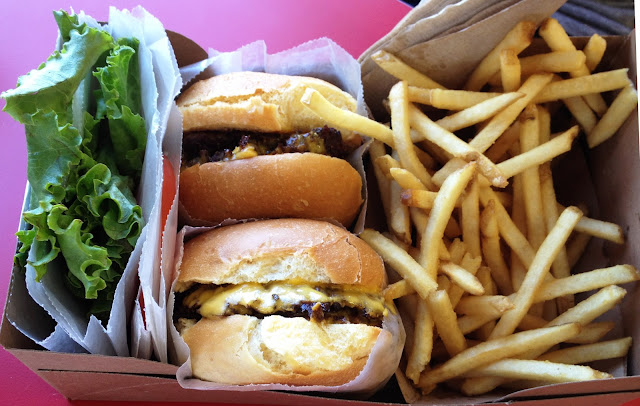 Having had great success with Big Dean's, The Marinater and I decided to try our luck with a burger on the Santa Monica Pier. It was my first time to the actual boardwalk. I immediately regretted my failure to spend time on the pier, previously. The sheer volume of bikini tops was staggering. I am moving to Santa Monica.

Pier Burger was a member of the King Seafood Company.  This group was best known, locally, for Ocean Avenue Seafood. This was their first foray into fresh food fast, and it was certainly a departure from their seafood roots.

Parking was free at a nearby parking structure, but we could have paid to park in the adjacent lot. The ordering situation was pretty standard: order at the counter; pay; find seating; wait for your name to be called. We did all that. We spoke with a couple of friendly staffers...there were about 9 people working the bustling establishment. Pier Burger was moving some serious volume in terms of burgers. Our double cheeseburgers were ready in about 5 minutes.

The Beef: Boom! The beef at Pier Burger was fresh, 100% Angus Chuck from West Coast Prime Meats. The bite led off with a strong and satisfying rush of beef flavor. The burger patties were 3.5 ounces each, so we were bumping up against the 1/2 pound mark for the double cheeseburgers. The burgers were juicy and surprisingly hot. The grind was coarse. This, when coupled with the creamy American cheese, created a most intriguing texture. The beef was not even remotely complex. It was just hot, juicy, and beefy. I did find the burger a little oilier than I preferred, but that was my sole qualm. The beef was a big winner. 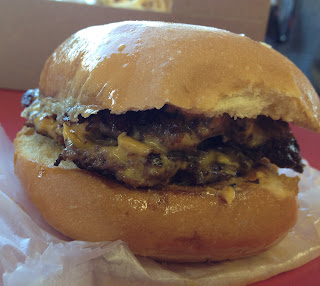 The Seasoning: The exterior of the burger patties was hit with a dash of something savory. This perfectly enhanced the beefiness, and it wed marvelously to the crisp sear.

The Sear: YES! Who needed bacon when you have the sort of sear that Pier Burger applied to my burger patty? Trick question--one always needs bacon. Still, in the case of Pier Burger, the sear was the next best thing. The sear was dark, crisp, and nearly glassy. This was accomplished by cooking the burger patties on a perfectly seasoned, 425 degree, flat top, and leaving them alone. The oil from the burgers served to deliver the perfect sear for these small patties. I suppose a leaner burger would have become rubbery and dry in the face of that heat. Tradeoffs...I was OK with a little extra fat in exchange for a crisp sear.

The Preparation: The burger meat arrived pre-ground at Pier Burger. The patties were formed throughout the day, by hand. The irregular patties appeared to have been smashed onto the griddle while cooking. The burgers were cooked to a very juicy Well-Done. This served to maximize the beefiness by melting all of the collagen in the ground Chuck.

The Cheese: Two perfectly melted, creamy slices of American cheese smothered/permeated/perfused each bite of the coarsely ground beef. This was infinitely satisfying. The cheese lent texture, mineral notes, and umami to the beefy bite. The cheese completed the straight-forward beef with the necessary complications. 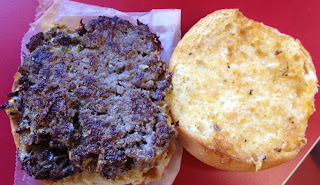 The Bun: Pier Burger used potato buns, which were supplied by Artisan Bakery. The buns were fresh, moist, springy, slightly sweet, and just right to capture all of the juices from the burger patties. The buns tasted heavily of butter, and I found this to be too rich considering the amount of fat from the beef. The buns were not thoroughly toasted, but the crunch from the monster sear made up for this.

The Meat To Bun Ratio: Considering the moistness of the tender potato buns, the ratio would have been spot on for the single burger. It was perfect for the double cheeseburger.

The Toppings: Pier Burger provided fresh Romaine lettuce and a nice, ripe slice of tomato to top the burgers. The restaurant also made a burger sauce from scratch. This could best be described as a flesh-colored, tartar sauce. I liked it on the fries. 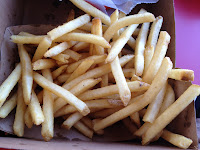 The Value: The tab was just over 17 bucks for two double cheeseburgers and a 1/2 pound of fries. The burgers were $6.50 each. The value was just fine at Pier Burger considering the strong quality of the meal. Pier Burger's lineage was fish house and steak house...the ingredients reflected that.

I walked into Pier Burger with low expectations. I walked out of Pier Burger with plans to come back the following weekend with Happy Meal. Pier Burger could have served up a mediocre product to tourists and made a fine profit on one and done business. Instead, Like Big Dean's, they served a delicious burger that was made from great ingredients. I predict that Pier Burger will garner a strong local following.

Burger Review : A nearly perfect burger was enjoyed at Pier Burger. Go soon, Brochacho...you will not be disappointed.