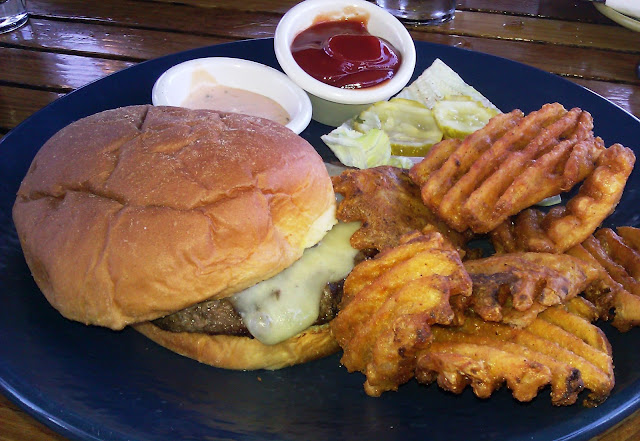 The Marinater, Happy Meal, and I found ourselves critically low on cheeseburgers. The Marinater mentioned a cheeseburger happy hour in Malibu, so we all strapped on our jet packs and soared over the PCH traffic to the beachfront establishment. There was valet out front, but there was also free parking along the highway. Valet parking is for guys without jet packs. 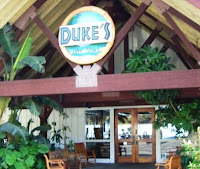 The happy hour special on burgers was at the adjacent, but attached, Barefoot Bar. This excited Happy Meal, until I explained to him that he would be keeping his shoes on regardless of the name of the restaurant. This did not stop him from putting on a pre-meal, crabwalking clinic.

The Beef: Bah. The beef in the cheeseburgers at Duke's Malibu was completely average. The menu declared that the pre-ground burger meat was Certified Angus. The Well-Done, 1/2 pound patty tasted of previously frozen 80:20 Chuck. The flavor was mildly beefy and..............that was it...just mildly beefy. The flat, uniformly round burger patty was juicy, but it was also on the rubbery side. The beef was not awful, but there was nothing noteworthy about it. 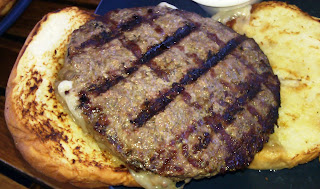 The Seasoning: There was none. That was a grievous error. The burger meat at Duke's Malibu was in dire need of seasoning to give the mild flavors some much-needed help.

The Sear: Meh. The Charbroiled Cheeseburger patties were neither charred nor broiled. They were emblazoned with paltry, thin grill marks. This imparted no interesting texture or flavor to the bland beef.

The Preparation: It seemed safe to assume that the burger patties at Duke's Malibu arrived pre-formed. The preparation was simply frisbeeing the Chuck discs onto a grill and cooking them to a Well-Done.

The Cheese: The menu promised aged Cheddar. What we got on the Charbroiled Cheeseburgers was something more like Mozzarella. The cheese was completely dull and bland. It contributed nothing to the bite. There appeared to be some Cheddar on The Marinater's Mango BBQ Burger, but that was obscured by the cloyingly sweet BBQ sauce.

The Bun: Duke's Malibu prided itself on serving its burgers on King's Hawaiian Rolls. The bun was sweet, as expected. It compressed when handled. The flavor was sweet and moderately yeasty. The buns were not adequately toasted, so there was no crunch in the bite.

The Fries: Duke's Malibu served  up previously-frozen, par-cooked, peel-on waffle fries. The fries were good. They were properly browned, crisped, and seasoned.

The Toppings: The Iceberg Lettuce on the Charbroiled Cheeseburgers had seen better days. It had already begun to oxidize and turn brown. The tomato slices were fresh and juicy.

The Value: Meh. I walked out of Duke's Malibu 40 bucks poorer for having purchased three burgers and three soft drinks. The happy hour burgers were $7.50. Even at that discounted price, they were over-priced considering the meager quality.

The burger experience at Duke's Malibu led me to further believe that there are no excellent burgers in Malibu, CA. One pays for the view rather than the quality of the food.