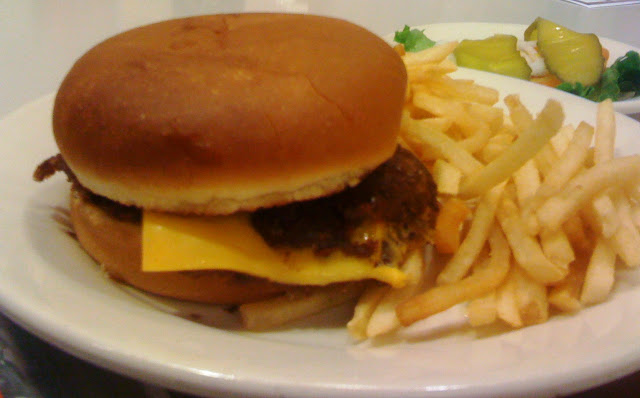 Prior to this visit, I had only been to one other Steak 'n Shake location, and that was in Florida. This Steak 'n Shake was a recently opened franchise unit (December 2010). The establishment was located in the South Point Hotel Casino in Las Vegas, NV. It was owned by the casino. Happy Meal, The Marinater, and I had just driven for four hours, and we arrived at the restaurant just as they were opening. A hungry line had already formed, but we were seated in the first wave. We ordered a couple of the Steakburgers and settled in for a brief wait. I ordered a double, since a triple came to just over 1/3 of a pound. Anything less than 1/4 pound would have been lost in the bun--that was my thinking. I should have ordered a quadruple.

Here is some background on the Steak 'n Shake concept from their site:


For over 75 years, the company's name has been symbolic of its heritage. The word "steak" stood for STEAKBURGER. The term "shake" stood for hand-dipped MILK SHAKES. Gus was determined to serve his customers the finest burgers and shakes in the business. To prove his point that his burgers were exceptionally prime, he would wheel in a barrel of steaks (including round, sirloin, and T-bones) and grind the meat into burgers right in front of the guests. Hence arose the origin of our famous slogan, "In Sight It Must Be Right."

The Beef: The burger patties were tiny. Each patty was 2.2 ounces before cooking, and they were cooked HARD. The burgers tasted mildly of beef around the edges, but the overwhelming flavor was steak fat. The burgers, according to our knowledgeable waitress, were a custom blend of Tenderloin, Sirloin, and T-bone. That combination of premium cuts should have been delicious. However, the promise of all that premium beef did not come through. The only flavors that appeared on the palate were a faint flavor of aging, a very mild beef flavor, and a strong hit of steak fat. The thin, beef patties in this cheeseburger were completely unremarkable in spite of the claim of superior ingredients. It was safe to assume that the beef had arrived pre-ground and probably frozen.

The Sear: Steak 'n Shake's claim to fame (in my mind) was an amazing sear on a thin, smashed burger. The sear was crisp, brown, shiny, and completely even. Every bit of juice that was squeezed from the beef as it was pressed onto the flat top was captured in the sear, which constituted most of the burger. Unfortunately, the insipid beef and the utter lack of seasonings caused the sear to provide nothing in terms of flavor. It tasted like crisp, bland, beef fat.

The Preparation: The lilliputian beef balls were smacked onto the griddling surface and smashed with a hot grilling weight. This caused them to cook rapidly and to yield all of their moisture leaving only the fat behind. This would have worked with a leaner and more flavorful blend of ground beef. I recalled that the Steak 'n Shake burgers in Florida were far more flavorful. I found it confusing that the chain had a display, which hawked its bespoke seasoning salt, but none of that seasoning found its way onto the burgers.

The Cheese: A single slice of American cheese was sandwiched between the thin, bland patties. It was not properly melted. The lone slice of cheese was not enough to carry the dish in terms of salt and umami. The beef was too bland, and the bun was too large.

The Bun: The bun was simply too big and too dry for the double burger. It was a plain hamburger bun, and it was day past its prime. It was perfectly neutral in terms of flavor. I tried discarding the top half of the barely toasted bun, but even that only helped a little. This cheeseburger simply lacked the moisture to lend a satisfying mouth feel. 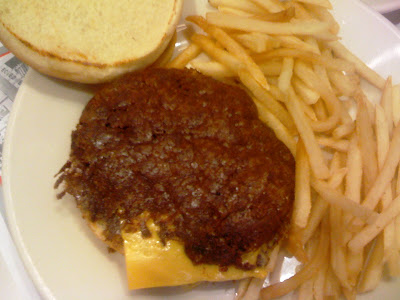 The Meat To Bun Ratio: The bun dominated the weak beef.

The Fries: The shoestring fries were crisp and golden. They were also woefully under-seasoned. This meant that the fries were bland and uninteresting.

The Value: The tab for three came out to around $20. None of us walked away hungry, and Happy Meal loved his shake. The value was average for these very average, bland burgers.

The Las Vegas outpost of Steak 'n Shake was inferior to what I recalled being a pleasant and competent burger. If that's what nostalgia tastes like, then I strongly urge everyone to avoid nostalgic repasts. These burgers were bland, bland, bland.