I had driven past Tom's Super Burger on a number of occasions, and it was simply impossible to pass up a burger place with the word "super" in its name for even one more day. Yelpers were generous with praise, so the siren's call was nearly deafening. Fat Bruce Lee, Chi Burger, Special Guest, and myself piled into Fat Bruce Lee's ride and made the short trip to Tom's Super Burger. The sign indicated that the name may have really been Tom's Super Burger II, but I couldn't find any reference to the original. Parking was free in the small strip mall, which also housed a barber shop, a defunct florist, a health food store, and a dry cleaner. Chi Burger was delighted that the restaurant also served teriyaki chicken over rice, and he did his thing. The rest of us dutifully ordered an assortment of cheeseburgers. The patties were nearly thin enough to read through, so I ordered a Double Cheeseburger combo ($6.59 before tax). Our meals were ready within 5 minutes.

The Beef: The thin beef patties had arrived at Tom's Super Burger pre-formed and frozen. Each patty weighed in at about 3.5 ounces, and the fat content was around 20%. This was generic burger meat, so it was Chuck. The patties were moderately beefy. They were salty, but I did not witness salt being applied as the burgers cooked, so I assumed that this was done well in advance. The burgers were also a little chewy. They somehow managed to avoid dryness. There was no trace of aging, but the burger meat did pick up a whiff of carbon from the grill flare-ups. The beef was average.

The Seasoning: I'm not sure where it came from, but the burgers were salty. This was not overbearing--it was a level comparable to what one tastes at In 'n' Out. 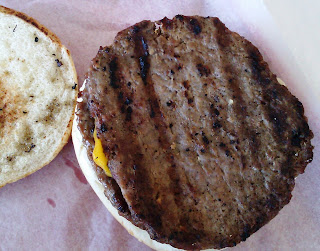 The Sear: The sear was nominal. The burgers lost a lot of fat on the grill, and they were thin enough that a good sear would have been nearly impossible to develop without using a flat-top or a broiler.

The Preparation: The burgers were cooked to Well-Done on a smoky gas grill. The grill was in a perpetual state of untended flare-up, but somehow the burgers were not ruined. The burger meat was finely ground. There was little going on by way of preparation at Tom's Super Burger. This was a simple burger joint, which assembled simple burgers.

The Cheese: My Double Cheeseburger came with two slices of nicely melted American cheese. The cheese was satisfying and familiar. It added just the right amount of moisture to the dish.

The Meat To Bun Ratio:  Flawless. 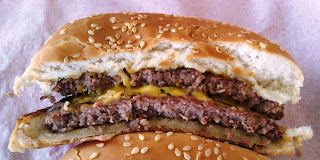 The Fries and Rings: The fries at Tom's Super Burger were far from super. The fries were peel-off, nicely seasoned, but under-cooked. The thickish fries ended up being mealy and bland. The onion rings were far crisper. Sadly, the staff put the HOT rings on a styrofoam plate, and this melted the plate, leaving me to wonder about the safety of eating the rings.  OK, they were delicious and sweet.

The Toppings: I ordered my cheeseburger plain, but the Iceberg lettuce was shredded, and I didn't see any tomatoes.

The Value: All in, my Double Cheeseburger Combo came to $7.19 with tax. That was a little steep for an average burger, sub-par fries, and a soft drink, but it was not egregious. Chi Burger ordered a little of everything, and his bill was $11.20. This caused us to speculate that he had spent more than any other customer had in the history of Tom's Super Burger. 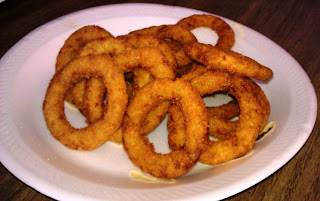 There was nothing super about Tom's Super Burger. It was OK. The burgers were average and quite pleasant. 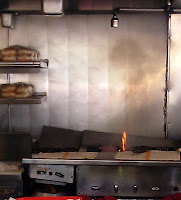