On this particular day, I was completely ravenous. In the morning, I had run 88 flights of stairs (equivalent to the Empire State Building) in Santa Monica. I had a couple of protein shakes under my belt, but I needed to replenish. Happy Meal and I had settled on Chinese food. Luckily, I overshot the parking lot of our destination. We circled the block, and we found some free street parking on Motor Avenue. As luck would have it, we came upon El Nopal on the way to Kung Pao. My nutrient depleted self suddenly wanted a burrito, and I started working to convince Happy Meal that he also wanted Mexican food. Then we noticed that the specials board was promoting something in the cheeseburger genre. Sold!

El Nopal was about half full at 6:30 on a Sunday evening. We ordered a couple of the Tijuana Torpedoes--each consisted of 2 Angus patties, Pepper Jack cheese, Chipotle sauce, roasted Poblano chiles, and onions (we skipped the Poblanos and onions). As we waited, Happy Meal experienced his first run-in with Serrano chiles in the form of a salsa. He was convinced that he would never feel normal again until our waiter, Adam, kindly brought some sour cream to salve the lad's tongue. El Nopal's real claim to fame was the pregnant burrito, and they had even trademarked the use of the word PREGNANT in connection with the word BURRITO. The pregnant burrito was what I was craving, but the siren's call of a cheeseburger lured me away.

Our burgers arrived in about 15 minutes.

The Beef: The beef consisted of two patties of pre-formed, previously-frozen, Angus Chuck. The burger patties each weighed in at about 4 ounces, so this was a hefty cheeseburger. The ground Chuck patty was on the rubbery side, but it had a strong beef flavor. Additionally, the patties were thin enough that they weren't a chore to chew. The burger patties at El Nopal were fine. 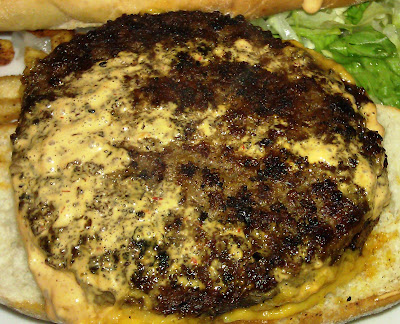 The Seasoning: This tasted much like a fajita seasoning blend with a little extra salt. Additionally, the burger patties were cooked on the same griddle as everything else at El Nopal, so the the various spice blends insinuated themselves into the beef. The seasoning was a winner.

The Sear: The sear from the hot griddle was perfect. It was even, dark, and  crisp--it served to add character to the otherwise one-dimensional beef.

The Preparation: The burgers at El Nopal were cooked to Well-Done on a very hot griddle.

The Cheese:  The Pepper Jack Cheddar, which I expected, appeared to have been replaced with a mild, yellow Cheddar. In spite of the less flavorful substitution, the Chipotle sauce added just the right creaminess and savory notes to compensate. I imagine that the Pepper Jack Cheddar would have been superior in both flavor and texture. Still, the Cheddar was plentiful and well-melted. It did add some welcome moisture to the dish.

The Bun: The buns used by El Nopal were Bolillos (Mexican baguettes). The Bolillos were sourced from Venice Bakery. Even though we came in on a Sunday, the bread was fresh and moist. The bun was mildly savory, tender on the inside, and the crust was firm enough to hold everything together. This was an excellent choice for a bun. The bun was not toasted.

The Fries: El Nopal served up a generous portion of fajita-seasoned fries. These were food-service fries, so they had been delivered frozen. Still, the skinny, peel-off fries were seasoned well and cooked properly. I had no complaints with the fries.

The Toppings:The shredded Iceberg lettuce and the Roma tomato slices were both very fresh.

The Value: The cheeseburger torta (Tijuana Torpedo) at El Nopal was $8.99. This was for a 1/2 pound cheeseburger with a generous side of fries, and the preceding chips and salsa. Neither Happy Meal or myself were able to finish our food. The value was good.

We blundered into El Nopal, and we were glad that we did. The Chipotle-sauced torta burgers were satisfying. Additionally, this burger was relatively close to our home, so we may have found another convenient go-to burger in LA. Keep in mind that this cheeseburger has never been on the official menu, so it you don't see it, ask for the Tijuana Torpedo.

Burger Review : The Tijuana Torpedo was a pleasant surprise. I will be trying this one again.

18JUL11...I returned to El Nopal with Fat Bruce Lee on the day after the initial review. Far Bruce Lee had earned a caloric reward. He had bet me 200 push-ups that the USA women's soccer team would beat Japan in the 2011 Women's World Cup, and Japan won in overtime on penalty kicks. On this occasion, I asked them to toast the roll and to use American cheese. Boom!  This was an improved burger. Those little tweaks bumped it up to a solid 3.5 bites, and that rounded to a 4.

The Pregnant Burrito: Delicious! This was a very large tortilla stuffed with pulled, spiced chicken, avocado, and onions. It was smothered in enchilada sauce and melted cheese. Fat Bruce Lee declared, "If anyone decides to eat me after I die, I hope they cover me in that sauce and cheese." It was that good. If you find yourself at El Nopal, get both the Tijuana Torpedo and the Pregnant Burrito and split them with a friend. You will be happy that you did.