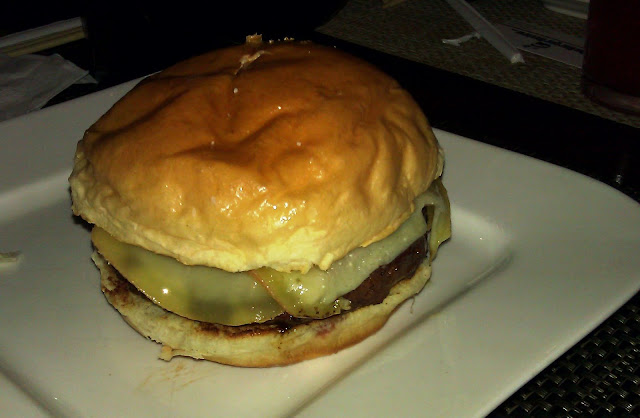 I finally had an opportunity to try the much-lauded Bachi Burger. The restaurant had been garnering Top Ten List spots and other awards for a few years, and I was eagerly looking forward to having a fantastic burger. Accordingly, I got together 4 friends, and we hungrily descended on Bachi Burger with high expectations.

There was no wait at 6:00 PM on that Thursday evening, and there was ample parking in the lot of the out-of -the-way strip mall, which housed Bachi Burger. I did find it surprising that the staff at Bachi Burger, in spite of the name of the place, knew very little about the burgers themselves. Most of my questions were met with puzzled looks. I was finally handed the chef's card, but I had left several messages for the chef over the past several weeks, and I had not heard back. I didn't like my chances any better of getting a call back after visiting the establishment. After this scathing review, the likelihood was further diminished.

We ordered 4 various beef burgers and one veggie burger. I ordered the simplest burger possible. The menu listed this as the BBQ Bachi Burger 7 oz Angus Beef. Others were more adventurous and ordered the Wagyu Patty and the Ronin. Our burgers arrived in about 20 minutes, and we snacked on an assortment of pickled vegetables while we eagerly awaited our burgers. The pickle assortment ($3.00) was inventive, fresh, and flavorful. The colors were a treat, as well. If only the burgers and fries had been as good as the pickled vegetables.

The Beef: Here is where the disappointing burger experience began. I asked several of the staffers what cuts of beef were in the standard burger, but no one could tell me anything that wasn't printed on the menu. The manager was finally called over, and he informed me that the burgers were  made of Rib Eye and Rib Eye only. He indicated that the beef was ground in-house, and that the various types of beef were sourced from a variety of vendors. Beyond that, details were not forthcoming. The fat content was a mystery, so I will guess that it was about 20%. Expecting a flavorful and firm-textured Rib Eye, I ordered my burger Med-Rare as did the rest of the table.

The beef was finely ground, mushy, and bland. The beef (both standard burger and Wagyu) was completely lacking in terms of any sort of beef, steak, mineral, blood, or other flavors generally associated with....quality beef. There was a mild note of aging, but other than that, the burger meat was devoid of flavor. The Med-Rare requests were ignored, and the burgers were delivered pretty darn Rare. Rare Rib Eye should have delivered some flavor, but instead we got nothing. The texture was downright off-putting. It was warm, wet, raw, tastless beef in baby food form. I didn't notice a single newborn or geriatric in the restaurant, so the texture of the beef seemed to serve no functional purpose.

The Seasoning: My burger was brushed with a mild and sweet BBQ sauce. The sweet sauce on the insipid beef was a dull combination.

The Sear: Don't let the photos fool you--the dark coloration of the burger patty was from the BBQ sauce. The sear was barely present in the form of thin grill marks. Not that it mattered. Well-seared mush would have tasted the same as unseared mush.

The Cheese: I ordered my $7.50 burger with the $2 Pleasant Ridge Reserve American Cheese. I thought that I would be getting a fancy American-style cheese. I asked my server, "Do you have American cheese?" He pointed out the Pleasant Ridge offering. Sadly, what actually arrived on my burger was a double slice of an aged white cheese. The cheese tasted like a Swiss/Gruyere hybrid. It was delicious...on its own. This cheese delivered  savory flavors in the form of tiny salt crystals in its flesh. It also had notes of umami and iron. Sadly, this was not a cheese that melted well in the hands of the kitchen staff at Bachi Burger. Rather than melting, the firm, aged cheese was warmed just to the point that it sweated out copious amounts of oil. The oil, which the cheese exuded, coated the lips in an unpleasant way. The resultant texture of the cheese was leathery. That tough texture was even more jarring when it was mixed into the pablum that was my burger patty.

The Bun: The bun was terrific. It was a Hawaiian-style sweet bun. It compressed nicely, and its sweetness complemented the BBQ sauce on my burger. The source?  That was also mystery to the front-of-house staff. The sugary bun retained its crispness from the toasting very impressively. The texture was wonderful. The bun was sweet and moist. It contained the juices of the burger and toppings with ease.

The Fries: We ordered several types of fries, and the potato varieties were utterly bland, uninteresting, and quite greasy. We were told that the fries were cut in-house. Maybe they were, but I was more curious how Bachi Burger managed to remove the flavor. The fries lacked any real potato character. They were devoid of the earthy notes that would have reminded one that they were consuming a tuber harvested from the soil. The fries were cooked to a reasonable, but pale, crisp finish in what was described as "vegetable oil." The various types of fries that we ordered were finished in a variety of interesting seasonings. The seasonings were competent, but the fries themselves were bland to the point of being inedible. The sweet potato fries were fine. Nothing to write home about, but they were far superior to their bland, potato-based cousins.

The Toppings: The toppings on the various burgers were inventive and strongly flavored. However, these only served to mask the bland beef upon which they were sitting.

The Value: The value was impressively weak at Bachi Burger. The quality of the beef and fries was shameful in terms of flavor. 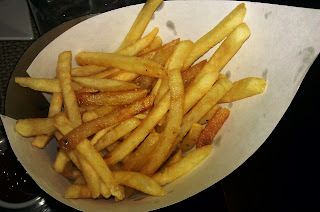 Many will disagree with this review, based upon the press that Bachi Burger has garnered. Nonetheless, I can attest to the fact that 4 men walked in hungry, and 4 men walked out hungry. Not one of us ate more than 50% of our bland, mushy burgers. Our fries were barely touched. The front-of-house staff failed to notice our grim dissatisfaction and our half-eaten burgers. Standards were exceedingly low at Bachi Burger. In fairness, the member of our party that ordered the veggie burger was happy with her meal.

Burger Review : Bachi Burger delivered impressively bland burgers and fries with interesting and strongly flavored toppings. It was all flash and no fundamentals. This was all Dennis Rodman tats, garb, and 'tude with no actual basketball skills. The staff was clueless (both front and back of house).