Of all of the French bistro burgers that we have enjoyed, this was not one of them. What the heck did we expect---it's a French bistro in Culver City. The real goal of the outing was to re-review Father's Office, since a co-worker claimed that the present review was unduly harsh. Naturally, Father's Office in Culver City was not open for lunch. La Dijonaise was packed, so it appeared that Father's Office was revenue opposed. STEEERIKE TWO! La Dijonaise was only about a block away, so we gave it a shot. Even the Zagats guys gave it props, so how bad could it be, right? Pretty GD bad. 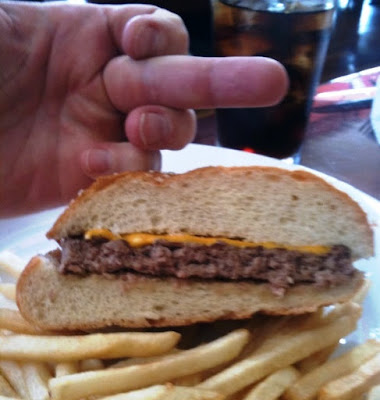 It turned out the that place was Vegetarian-friendly, considering that the burger was pretty much meat-free. There was no point in telling them how to cook the damn thing--the picture is of a burger ordered as Med Rare. The patty was so thin, and they cooked the burger at such a low temp on the grill that by the time it got whatever meager grill marks we witnessed, the burger was well over-cooked. Somehow, ALL of the fat in the burger survived the cooking process, so the burger was also ridiculously greasy and rubbery.

Burger Review : While this was not a complete sh#twreck. I would never eat a burger there again.