Happy Meal ordered the double burger--$6.99. I ordered a plain cheeseburger with aged Cheddar--$9.99--from the Ruby's Ultimate Kobe Burgers section of the menu. Here is what the menu had to say about the Kobe Burgers:

"The star of our Ultimate Kobe Burgers is the world-famous All-American Kobe beef.  Beyond traditional classification, American Kobe is an ultra high-end prime grade of beef famed for its wonderfully tender bite and rich flavor.  Our American Kobe is grilled to perfection and served on a lightly grilled artisan roasted onion bun and paired with the ultimate in fresh gourmet toppings."

The Double Deluxe Cheeseburger Beef: Plain old USDA Prime Chuck. It was ground to a medium grind, packed pretty densely, and pre-formed into patties. This was standard and bland as one would expect in a thin, diner-style, Chuck burger patty.

The Ultimate Kobe Burger Beef: It was hard to tell what happened there. The general treatment of the beef appeared to be identical to the standard burgers. Happily, this burger actually had a nice, satisfying, beefy flavor. No aged flavors came through, and it certainly lacked the juiciness that one would expect from Kobe beef. I suspect the Kobe component made up for a tiny percentage of my cheeseburger--approaching zero.

Seasoning: What seasoning? In spite of the wait staff's assurance that the burgers at Ruby's Diner were seasoned on the griddle, I can firmly attest that they were not. As a result they were relatively bland.

The Sear: There was no sear on the razor-thin patties of Happy Meal's Double Deluxe Cheese Burger--these came out wet and grayish. The sear on the thicker, single patty of the Ultimate Kobe Burger was nice.  It was crunchy, dark, and competent.  The burgers were clearly cooked on a griddle rather than grilled as suggested by the menu.

The Preparation: While they promised that the Ultimate Kobe Burger would only be mauled (cooked to Med-Well), it was murdered (cooked to a vulcanized Well-Done). Oddly, the Well-Done patties of the Double Deluxe Cheeseburger were juicier. 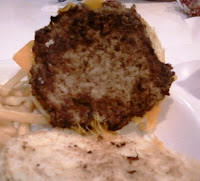 Cheese: They doubled up on the American cheese on the Double Deluxe Cheeseburger, and that made the dish quite satisfying--it was savory, gooey, and creamy.  It was a challenge to get Happy Meal to hand over his burger so that I could try it, and he watched me pretty closely to make certain that I didn't take too big of a bite.

In the case of the Cheddar used on the Ultimate Kobe Burger...it was pretty good.  It was thick and savory with a mild bite that almost worked with the moderately flavorful patty. It did not provide enough moisture to make up for the dryness of the beef or the bun, however.

The Bun: A standard, toasted, seeded, hamburger bun was used on the Double Deluxe Cheeseburger. The bun was sweet, chewy, and had a nice crunch from the toasting process. That bun worked with the American cheese to compensate for the bland beef..

The "lightly grilled artisan roasted onion bun" used on the Ultimate Kobe Burger was really a barely toasted, dry, high-domed, oniony bundle of inappropriate. The onion flavors dominated the burger. The dryness of the bun had me reaching for my beverage to avoid renal shutdown. As a result, I removed at least half of the bun and ate the burger topless.

The Meat to Bun Ratio: This was completely perfect in the case of the Double Deluxe Cheeseburger. Meanwhile, the onion bun on the Ultimate Kobe Burger--that was a disaster. That bun was massive bread overkill.

The Fries: The fries at Ruby's Diner were spectacular. They were perfectly browned, very crisp, and cooked in fresh peanut oil.  They were also perfectly seasoned.

The Value: The value of the Double Deluxe Cheeseburger ($6.99) was fine. The value of the Ultimate Kobe Burger ($9.99) was strongly diminished by the over-cooking, the lack of seasoning, and that awful, dry, onion-heavy bun.

If I had to do it all over again, I would have ordered the Ultimate Kobe Burger patty with the American cheese and the standard burger bun.  I would have also asked that they made certain to hit the burger with seasoning on the grill and that the burger not be aggressively over-cooked.  Had all of that been in place, this could have been a really decent burger. As it was, the burgers were pretty average, and each had certain elements that we look for in a good burger.

Follow up-- Happy Meal and I returned the following evening so that I could test my burger hypothesis.  I ordered the Ultimate Kobe Burger patty with the American cheese and the standard burger bun.  I insisted that they griddle it to Medium and season it as it cooked. The result was a wonderful 4 Bites cheeseburger. The beef came out pink, juicy, and flavorful with a wonderful crunchy sear. The American cheese lent the creaminess and savory flavor for which it was destined. The standard hamburger bun was supple and just a little sweet.  The sum of this was a darn fine burger. The 3 Bites rating stands for the burgers at Ruby's Diner, since this burger was not available on the menu.  Note: the Kobe Burger has been discontinued.

Update...19APR11...We returned to sample the standard Ruby's Diner Cheeseburger for $8.79. This one came with fries, and it was a better than average burger.