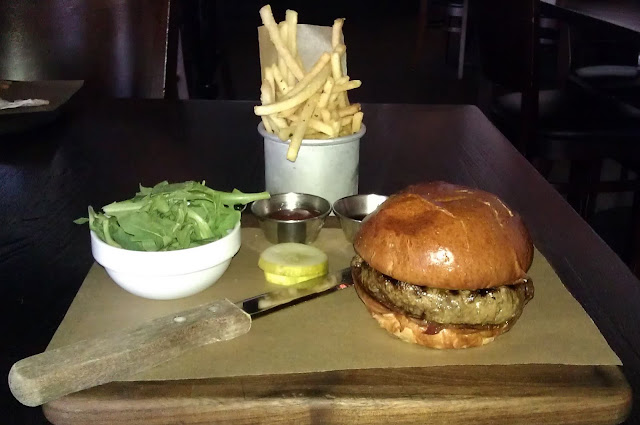 Upper West was a New American cuisine spot, and the kitchen was headed up by Texan Nick Shipp. Nick earned his cooking chops in Texas, and later moved to LA to spend a few years working under Wolfgang Puck. Most recently Chef Shipp was heading up the brigade at Pete's Cafe' in downtown LA. It was my strong hope that a Texan chef would deliver an excellent burger. He did.


Upper West employed crowd sourcing to hone the menu. They started with a bunch of dishes, and they stuck with the ones that the clientele gravitated toward. Fortunately, The Burger was a big hit--they were turning out about 100 of these every day. Make reservations for dinner. By 8 p.m. there wasn't an open seat in the house. Parking...get lucky..get set for a walk...or use the valet service out front. 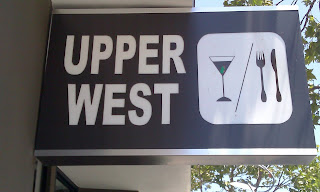 
The Beef: The beef blend in the burgers at Upper West was a proprietary and closely guarded house secret. Chef Shipp divulged that one component of the blend was corn fed Short Rib. The remainder was grass fed, and all of it was dry-aged. The beef was all natural and was fed no antibiotics. The meat arrived from the supplier in Omaha, NE, and it was ground fresh daily. The beef was wonderfully....beefy, and the texture of the blend had a satisfying steak feel to it. What was also present was the buttery complexity of what tasted like Brisket and the satisfying chewiness and grain of Sirloin. Regardless of the components of the blend, it worked nicely. The THICK, 8 ounce burger was juicy without being greasy. There was only the slightest hint of aging. Kudos to Chef Shipp for putting together a very thoughtful, hearty, and well-rounded bite of beef.


The Seasoning: The patties were formed daily just after the beef was ground, so there was no seasoning in the patties. The burgers were dusted with a kosher salt and pepper. I would have sworn that I caught a taste of a Worcestershire-style sauce in there, too, but that may have just been the beef juices mixing with the seasonings and a little of the cheese. The seasoning served to carefully complement the hearty beef flavors.


The Sear: The sear was appropriate for the steak heavy burgers.  In this case the sear was delivered in thick, crisp rows across the burger meat by the gas grill.  The center of the patty remained unseared, but this was because the patty was so juicy that the center could not get up to Maillard temperature--fully worth the trade-off. Upper West did have plans to shift to a wood-fired grill soon. A little smoke would have served to really put the already excellent burger patty over the top. 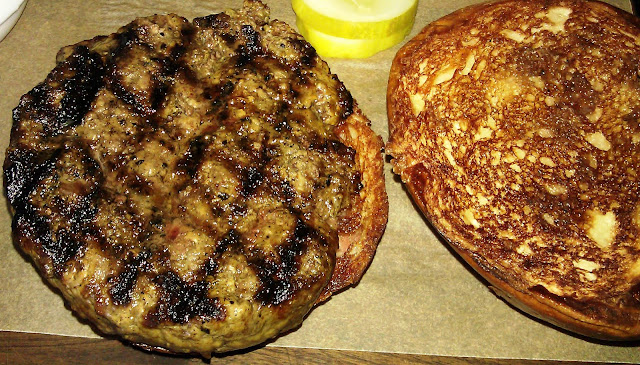 The Preparation: The beef was ground coarsely, formed loosely into thick patties, and left alone. The looseness of the patty allowed the various beef cuts in the grind to come through. My burger came out Med-Rare just as I ordered it.


The Cheese: This was a Goat Cheese sourced from Palos Verdes. It was blended with roasted, pureed Pasilla peppers, and roasted garlic. The creamy cheese was applied as a spread to the bun, and it served to bind the other toppings in place. The cheese blend delivered a nice funk and a creamy texture, which played off of the buttery notes from the bun, and what tasted like Brisket in the beef blend.  Ordinarily, this would have been reaching a little too far, but in the case of the burger at Upper West, it just worked. The creamy texture of the cheese allowed the flavors to work their way into every bite. Chef Shipp managed to balance the flavors and textures so that the raw honesty of the quality beef came through while the gourmet ingredients managed to make themselves apparent and appreciated without drowning out the fundamental flavors of the dish.


The Bun: The toasted brioche came from Ca 'd'Oro bakery. It was buttered and toasted. The bun was tender, resilient, fresh, yeasty, and toothsome. The competent bun managed to contain the juicy beef without drawing focus away from it. The shiny brioche was not greasy to the touch, which was a huge plus. 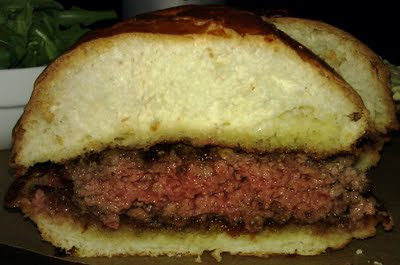 The Fries: On this occasion, I tried the Bleu Fries (Smoked Bacon and Bleu Cheese Fries), which were pure evil...in the best way.. As Nick Shipp called them, "Bar Crack". These were similar to poutine but made with Bleu cheese and bacon. They were ridiculously good, and they were nearly impossible to resist. These were not typical fries, since the sauce made them soggy, but they were delicious. Patrons of Pete's Cafe' followed Chef Shipp to Upper West in Santa Monica and demanded that these fries be on the menu.  After tasting them, it was easy to see why.


The Toppings: Upper West used an onion marmalade with balsamic vinegar.  After sampling the burger with nothing but meat, bun, and cheese, I added a little of the cold, sweet onion compote to my burger. The marmalade added just the right amount of sweet and sour to balance out the savory flavors from the seasoning and the pungent cheese spread. I recommend having this on the side so that you can add this sweet condiment to taste. The arugula was fresh, crisp, and added just a hint of bitter to work with the marmalade.

The Value: This was a $14 burger, and it was very good. The beef was extremely satisfying and it was a full half pound....so, two meals' worth. The value was....just fine.

In the end, this was a very solid and traditional tasting burger of very high quality. The beef was a superstar, and  the supporting cast of inventive, quality toppings all served to enhance the experience. For lack of a better word to describe this burger, it was Honest. I think this burger would have been equally delicious with a slice of melted American cheese of top. Chef Shipp confessed to sometimes eating his burgers in meat form only. The beef was that good. 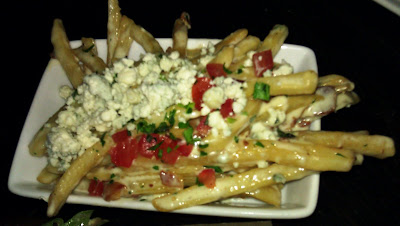