With the world still celebrating by Hines Ward’s dramatic Dancing With the Stars victory, Mello Yello and I took the opportunity to sneak past the distracted paparazzi for a night out on the town.  For dinner we chose Jimbo’s, a Cape Coral mainstay for the past several decades. 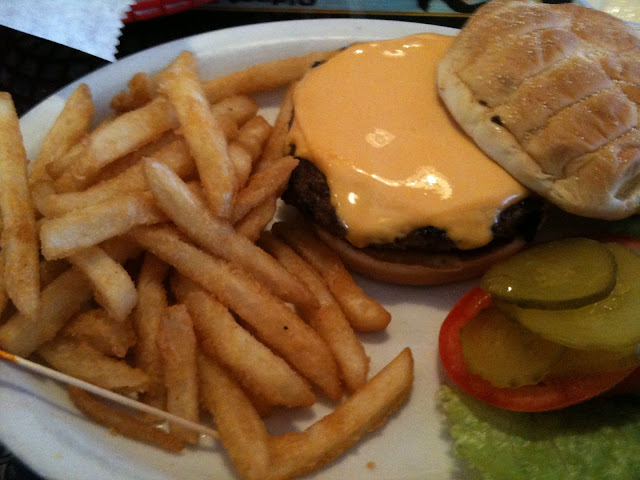 I had not dined at Jimbo’s since I was but a young Padawan learner, but I remembered it as a solid, American food joint.  Over 20 years later, it looked like that had not changed (and thankfully, they removed the creepy clown decorations that once littered the place).
Jimbo’s boasted over fifty specialty burgers, with selections such as the “Ba Da Bing Burger,” topped with marinara, home fries, and sausage meat, and served on a garlic bun, and the “Texas Red Burger,” served open-faced on Texas Toast, with grilled onions, chili, and cheddar cheese.  Being a Burger Buster, I opted for the plain old cheeseburger... 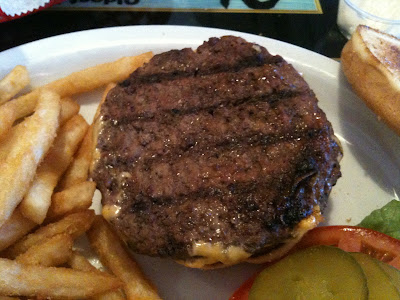 The Beef: The beef was standard 80/20 Chuck derived from Black Angus cattle. I was disappointed to learn that their beef came to the restaurant already ground. It was formed into a half-pound, uniformly-shaped patty. I was surprised with how tasty it was. My first bite was met with a strong iron flavor, and a fair amount of mild aging was conspicuously present in the finish.  The texture was just fine, and it was tender, reasonably juicy, and not at all greasy. The Chuck was beefy--they over-cooked it, so all of the collagen melted to yield a flavorful, but mixed, blessing.

The Seasoning:  They hit the patty with just the right amount of salt before grilling.  The open-flame grill also added some pleasant smokiness to the mix.
The Sear: The burgers at Jimbo’s were grilled, not griddled, so there was just a moderate amount of sear. However, the edges of the patty bore some nice crunch, strangely similar to what one would expect from a griddle-cooked burger.


The Preparation: I ordered the burger Medium, however, it arrived cooked at the top end of Medium-Well.  I really didn’t mind, as I tend to like my burgers cooked a bit more fully than most.  There were a couple of spots where the meat was affected by flareups on the grill, but they didn’t significantly detract from the sandwich.  The burgers at Jimbo's Restaurant were properly turned only once. The burger was served with lettuce, tomato, and onion (standard), which I promptly discarded.

The Cheese: The patty was topped with two slices of American cheese, perfectly melted. While that amount of cheese would overpower most burgers, it was the perfect amount for the generously-sized patty.  The cheese itself was nothing special, but it provided a nice, creamy texture to balance thedish.
The Bun: The bun appeared to be a standard, seeded, food-service Kaiser roll.  It was very lightly buttered, and it was toasted on the grill.  That made it delicious, and it held up well against a rather large patty.
The Meat to Bun Ratio: Precise. The diameters of the cooked patty and the bun were almost exactly the same.  Weird. 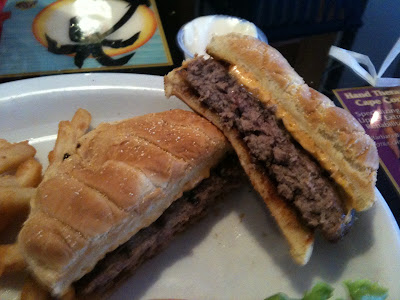 The Fries: Jimbo’s served lightly-battered fries, and they came out crisp and hot. Mello Yello did not care for them. I liked them quite a bit.
The Value: 8 bucks for a giant burger and a generous side of fries? Yes, please.
Tip: Get the onion rings.  They were absolutely delicious.

Burger Review: A solid burger. It was nothing worth cross-country travel, but it was a burger that tasted fine and left me satisfied.  A little more attention at the grill, along with some better ingredients, would make this a home run even without all the gimmicky toppings.