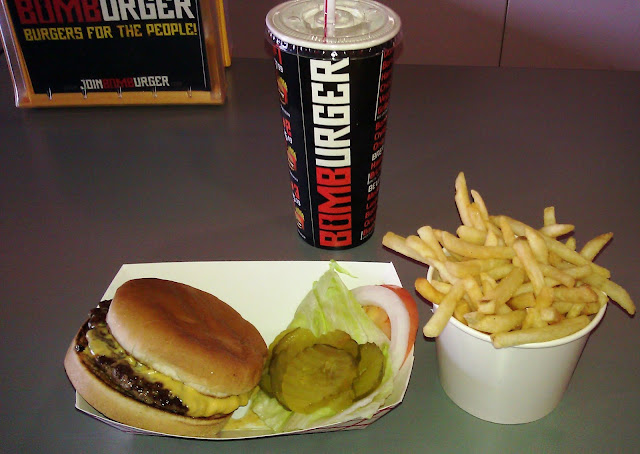 Happy Meal and I were in Huntington Beach to use our coupon for some discounted time in/on a Scoot Coupe...good, dorky fun. Happy Meal spotted BOMBURGER as we were tooling around the streets of Huntington Beach. Parking in Huntington Beach on a weekend can be a hassle, but we found parking for a buck in the garage around the corner. None of the staff appeared to be older than 18, so I dispensed with the usual attempts to discover the sources of the various ingredients. We ordered a sampling of burgers and fries at the counter and waited about 7 minutes for our number to be called. 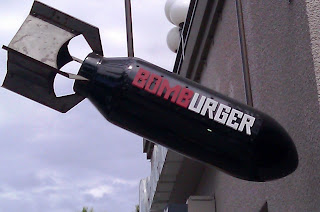 The Burger Breakdown...
The Beef: The beef at BOMBURGER tasted like Chuck with a 20% fat content. The flavor from the 4-ounce patty was nicely beefy. There was no trace of aging, and no mineral notes were present. The burger patty was juicy without being greasy. The texture was firm but not chewy. All told, the beef was just fine.
The Seasoning: The exterior of the thin, uniformly-shaped patties were seasoned with a pepper-heavy blend of salt and pepper. The pepper was very satisfying, in this case. It added a welcome dimension to the competent, but not exciting, beef.
The Sear: BOMBURGER nailed a nice sear on the flat-top. The burgers were turned a single time while cooking, and this allowed the thin patties to develop a proper sear. 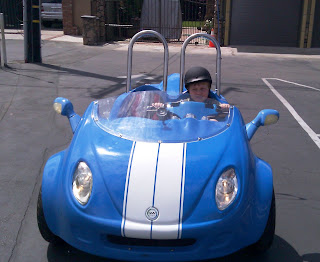 The Preparation: It seemed safe to assume that BOMBURGER received the burger patties preformed. The patties were very uniform, and they had a machined appearance to them. They were cooked on a blisteringly hot griddle, and the burgers were competently cooked to a juicy Well-Done. The seasoning was also appropriate. The preparation was just right.
The Cheese: The sole cheese choice at BOMBURGER was American, and this was just fine. The American cheese was properly melted, and it served to bind the dish in terms of texture and flavor. American cheese = WIN.
The Bun: The buns were standard, unseeded, hamburger buns. The bread was moist, fresh, moderately sweet, and just a little yeasty. Most importantly, the buns were toasted to a firm crunch, and this crunch carried through the entire dish. The contrast in texture was most welcome.

The Fries: The fries undoubtedly arrived frozen, but they were competently cooked in a neutral and  properly hot oil. The fries were crisp and perfectly seasoned.
The Toppings: The lettuce was a reasonably crisp and fresh, but bland, Iceberg lettuce. The tomato slice was unforgivably under-ripe. Pass.
The Value: A single cheeseburger at BOMBURGER was $3.99, and the combo (cheeseburger, drink, and fries) was $6.49. The burgers were small, but so were the prices. The value was average.
BOMBURGER served up burgers which neither bombed nor were "the bomb." The burgers at BOMBURGER were just fine. They were superior to In 'N' Out and TK's, and they were not quite as good at Five Guys Burgers and Fries. 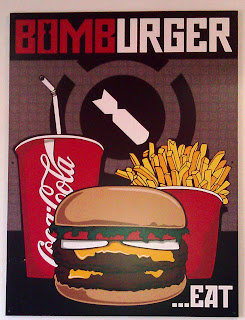