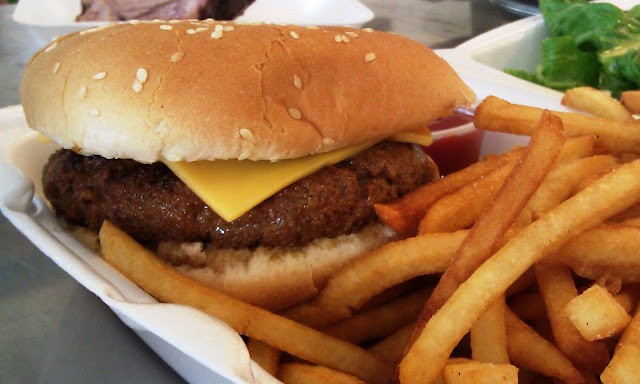 The second toughest guy at my morning bootcamp suggested that I try the burger at Victor's Meats and Delicatessen. What the hell--it was only a few blocks from the world headquarters, and I had been meaning to check out the butcher shop there anyway. Victor's sold Porterhouse steaks for $9.98/pound and Filets for $11.98/pound. I would be returning to Victor's for some steaks. The burger was advertised on the marquee, but there was no mention of it on the menu boards. No matter, I faked it and ordered a cheeseburger with some fries, a kiddie pool-sized soda, and a couple of pork ribs from the hot case.

Once I ordered my burger, so pretty cool things happened:

The whole cooking process took about 5 minutes. At the end, I had a roughly 1/2 pound cheeseburger, a gang of fries, a couple of barbequed pork ribs, and a quart of soda for $9.98. The tables (2) were outside at Victor's Meats and Delicatessen. These tables overlooked a parking lot and the 10 Freeway.

The Beef: The beef at Victor's Meats and Delicatessen was freshly ground, 80/20 Chuck. The burger was wonderfully beefy. It had no trace of aging. The grind was medium. The burger was nicely juicy and moist without a hint of greasiness. The bite was amazingly tender--there was no chewiness--the burger patty yielded without protest.

The Sear: The griddle applied a moderate and thin sear to the burger patty. The sear was not noteworthy.

The Seasoning: The exterior of the burger patty was satisfyingly salty. That was only the beginning, though. The interior was infused with the brisket juice, and this amped up the flavor of the Chuck to a level more commensurate with a premium cut of beef. 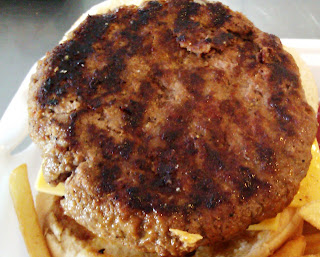 The Preparation: While I requested Medium, my burger came out closer to Well-Done, but that was fine. The 8 ounce cheeseburger at Victor's Meats and Delicatessen was juicy. I assumed that the longer cooking time rendered off some of the fat from the 80/20 Chuck. This was a fine compromise.

The Cheese: Victor's Meats and Delicatessen applied two slices of American cheese to my burger. Sadly, the cheese was unmelted. This meant that the American cheese did not add its usual creaminess to the bite.

The Bun: The standard, seeded, burger bun was briefly toasted in a massive Wolf oven. Unfortunately, the bun was two days past its prime. This made for a slightly dry bun. Had the cheese been properly melted, this would have been forgivable.

The Meat To Bun Ratio: This would have been perfect, but the stale bun skewed the ratio in favor of of the starch. I at mine R-rated (topless), and it was fine.

The Toppings: The Romaine lettuce was fresh and crisp. The freshly sliced tomato was crisp. This was not what I was looking for, but it was January, so ripe tomatoes were hard to come by.

The Fries: The fries were of the frozen, bagged, skinless, shoestring variety. The fries were fine. I did not go to a butcher for great fries. Still, the fries at Victor's Meats and Delicatessen were crisp, browned, and lightly salted. 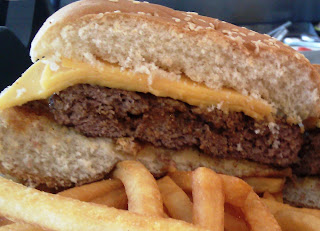 The Value: The wholes works at Victor's Meats and Delicatessen was less than $10. That was a fine value. I was not able to finish all of the food in front of me.


Victor's Meats and Delicatessen served up a better than average cheeseburger. The brisket juice really put it over the top. The value was remarkable, and the staff was friendly, knowledgeable, courteous, and prompt.

Burger Review : If you are in the Palms neighborhood, Victor's Meats and Delicatessen would be my suggestion for a darn fine burger and some very reasonably prices cuts of beef.