The Lab Brewing Company had been gently and politely inviting me out to Agoura Hills to try the burger there, and I will admit that I had been hesitant to make the 30-mile sojourn for a burger in the "outer provinces." That said, The Lab Brewing Company had been garnering favorable reviews for its ambitious menu, and I was at loose ends on a Tuesday night. The Lovely Romanian Princess had just departed for the chill of NYC, and I found myself in need of a drive and a cheeseburger to drown my sorrows. 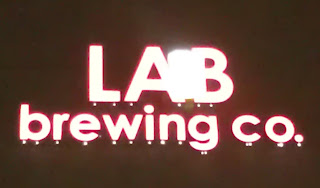 The Lab Brewing Company occupies the former Moz space in Agoura Hills. The new occupant dressed up the building and turned it into a functioning brew space with 188 seats, creations on the walls made by local artists, a stage for live music, and enough sound damping elements (including cork floors) to keep the din of a room full of diners down to a level where civilized conversation was an option. My civilized conversation was with part-owner and full-time Brewmaster, Roger Bott. Roger had been making his own beer since he was 16. Hint for the youngsters...they don't card when you buy yeast, malt, and hops. I had the opportunity to sample the Big Ass Red, a light and hoppy Extra Pale Ale. This was a remarkably well-balanced ale. The bitter note held strong and steady from beginning to end, but it was tempered with notes of wood, sweetness, and creaminess. This was an easy-drinking beer that made me think that 30 miles wasn't too far to drive after all. Roger kept 5 house-brewed beers on hand, and nice selection of guest taps. More impressive than Roger's encyclopedic knowledge of brewing science and the menu was the fact that after only 2 and 1/2 months of being open, guests continually came up to hug him and thank him for his hospitality. 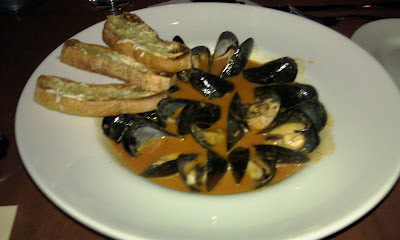 The Lab Brewing Company's menu was ambitious and varied. The ambitiousness of the complicated menu was heightened by the fact that the kitchen was manned by a brigade of three. The Executive Chef was Moez Megji. If you were paying attention, you may have noticed that the previous incarnation of the space was eponymous for the present Executive Chef. The menu was strong on seafood and fresh, seasonal ingredients. A butternut squash pizza with walnuts, caramelized onions, and Bleu cheese was one such seasonal dish, and I liked it more than I wanted to. I also tried the PEI mussels in a red curry sauce. This dish was heavy enough on the spice that the coconut notes of the curry were all but lost, and this caused me to wonder if the burger would be seasoned as bluntly.

I ordered one of the signature The Lab Burgers, and waited a scant 12 minutes with Roger until the burger arrived.

The Beef: The burgers at The Lab Brewing Company were a hefty half pound of Wagyu and Sirloin. The beef was only mildly wet-aged, and there really was no trace of aged funk. The burgers were wonderfully juicy. While it was clear that the fat content of the house-ground beef was just over 20%, the burger was not even remotely oily.  The flavor was restrained in a way that only a very competent and skilled chef can deliver. The bite was subtle and complex. There was a mild note of beef, which swelled as the dish cooled. There were delicate notes from the Sirloin, and they were pleasantly complicated and gently muted by the fat from the Wagyu. The texture was firm but yielding. All in all, this was a very pleasant and nuanced burger.

The Seasoning: The dusting of seasonings on the burger's exterior were complicated and foreign. The chef's African roots came into play here, and I stopped trying to guess the components of the seasoning blend. It was mildly savory and downright interesting. A variety of fresh herbs made there way into the grind to further complicate the flavors of the dish. I think a little bacon may have made its way in there, too. Bacon makes everything better. Bacon is a lot like cleavage.

The Sear: Yes! The sear on The Lab Burger was marvelous. The sear was thin, crisp, and remarkably satisfying. I found myself peeling away the sear from the uneaten half of my burger and snacking on it. 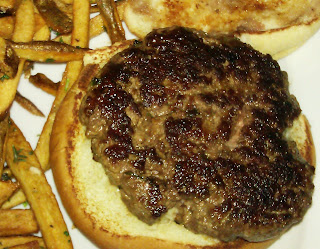 The Preparation: The beef was ground in the morning, and it was pattied twice--once for lunch and once for dinner. The three-hour rest period allowed the fat to reincorporate into the beef. The grind was medium on the coarseness scale. I requested a Med-Rare burger, and that was exactly what I received. The burger was cooked on a flat top/griddle, and that cooking surface must have been hot enough to smoke peanut oil. There was obvious skill in the kitchen.

The Cheese: The cheese used by The Lab Brewing Company on the burger was a mild blend of Gruyere and Bleu with just enough bacon to make it fun. The blend was heavy on the Gruyere, so the overbearing sharpness of the Bleu was kept at bay. This worked nicely. The subtle flavors of the cheese blend wove  into through the mellow flavors of the burger.

The Bun: The bun was a simple, sweet, buttery, unseeded model from La Brea Bakery. The buttery bun contained just enough fat to hold back the tide of juices from the burger even as the bun compressed. My fingers remained dry. The bun was remarkably light and tender. It was mildly sweet and not even a little yeasty. The bun worked with the burger. A yeasty bun would have dominated the delicate flavors of the beef and cheese.

The Fries: The fries were house-cut, peel-on, and par-cooked. They were cooked to a dark brown in hot vegetable oil. The fries were seasoned with salt and fresh oregano. There were other spices in the mix, but the oregano was the one that carried the most weight on the palate. The fries were hearty, earthy, and crisp. The mild bitterness from the deep browning made complete sense once the fries were dipped in a little ketchup. The bitter and sweet married perfectly. 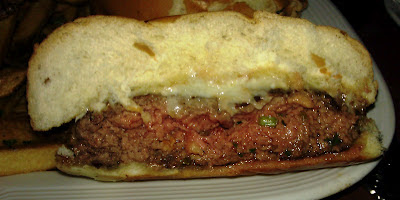 The Toppings: The cheeseburger at The Lab Brewing Company was probably best appreciated fully dressed. The arugula was perfectly nutty and nicely dressed in oil and lemon. This gentle tartness carried over into the sweet onion marmalade. When these two accoutrements were added to the dish, the result was a splendid bite. The arugula complemented the Gruyere. The tartness of the marmalade made its way into the beef and added a gentle note of iron to round out the flavors.

The Live Art of Brewing was what Lab stood for in the establishment's name. The beers were delicious and meticulously crafted. The same could be said for the burgers and other dishes at The Lab Brewing Company. I plan on returning to sample other items from the complicated and creative menu.

Burger Review : The Lab Brewing Company's burgers and hand-crafted beers make the trek from LA totally worth it. One of the finest burgers in Los Angeles can be found in Agoura Hills.