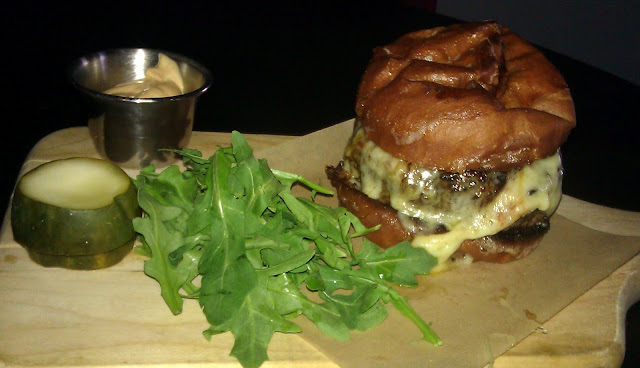 It was mid-Saturday afternoon, and I was at loose ends. I was on my way to FukuBurger when I noticed that The Den of Hollywood was open. I had been told about this burger by a co-worker, and this seemed like a good time to check it out. I opted for free street parking over the convenient valet. I found a seat inside and ordered one of The Den Burgers with a side of fries. The wait was about 25 minutes. This was unavoidable. I had walked in just after five other tables ordered food--the place had just opened up for the day. What made the wait bearable was the music. Shawnie, the wonderfully knowledgeable and accommodating manager was in charge of the music selection, and her tastes were eclectic and solid. I enjoyed listening to Lita Ford, Cake, The Housemartins, and Paul Simon while I waited. The Den of Hollywood had a sister restaurant--Library Bar. Library Bar is where the dough for the flat bread pizza with seasonal vegetables came from. The spicy sauce and fresh vegetables were a perfect match as an app.

The Beef: The burger meat at The Den of Hollywood was delivered, pre-ground, by West Coast Prime Meats. This was Paso Prime, grass-fed, California-raised beef. The cuts were Chuck, Short Rib, and Brisket. The Short Rib gave the 8-ounce burger a mild note of funk. The Brisket provided the chewiness and long-grained texture...along with some fat. The Chuck rounded out the burger and provided some mild beefy notes. The burger was mild but very juicy. It was also heavy on the fat. I pegged this one at around 23% fat. It wasn't overbearing, but it was a little oilier than I would have preferred. When coupled with the buttered Portuguese Roll, I was glad that I had been running stairs earlier that day. Even so, the fats in grass-fed beef were far better than the ones found in grain-fed beef. All told, the beef in the burger at The Den of Hollywood was of high quality. The texture had a nice firmness, but the beef was not chewy in the least. Lastly, the burger did have a nice taste of char, which was reminiscent of backyard cookouts.

The Seasoning: I caught a nice taste of salt and pepper on the exterior of the burger patty.

The Sear: The sear came from a properly hot grill. The grill marks were thorough, and the cooked layer of beef was relatively thin. This indicated a high cooking temperature. The sear lacked crunch, but it did impart just enough char to add to the flavor of the burger.

The Preparation: The beef was delivered pre-ground to medium. The burger patties at The Den of Hollywood were preformed during the prep shift just before the doors opened. The 8-ounce patties were formed with gentle pressure. My burger was cooked to a perfectly juicy Med-Rare.

The Cheese: The cheese choices were Gruyere and Cheddar. I was feeling fancy, so I went with the Gruyere. This was a good choice for this burger, since this Gruyere was less nutty than most, and it melted far better. The cheese provided a welcome firmness to the bite.

The Bun: The Portuguese roll was sourced from the Extea Basque Bakery. The small bun was fluffy, and it compressed nicely when bitten. The bun was toasted on the grill with a small amount of char. It was heavily buttered. There was little crunch from the flat top griddle, but the heavy butter treatment made it a little soggy in the center. The bun was mildly sweet, but mostly neutral. 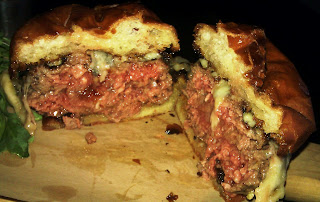 The Meat To Bun Ratio: The smallish bun held up surprisingly well to the big, juicy burger.

The Toppings: The arugula was fresh and nutty. The spicy mayo was just that....spicy mayo. It was fine for the fries.

The Value: The Den Burger at The Den of Hollywood was $11, and the happy hour-priced fries were $3. The value was average. The quality of the ingredients was high, and chef Bruce Kalman did a nice job with the ingredients and a tight menu.

Overall, The Den of Hollywood served up a very competent, but somewhat mild burger. Chef Kalman could have amped up the flavors in this burger. There was clearly a large amount of talent in the kitchen, so the tame choices baffled me. 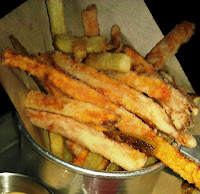 Burger Review : A mild, but quality burger, was served up at The Den of Hollywood.