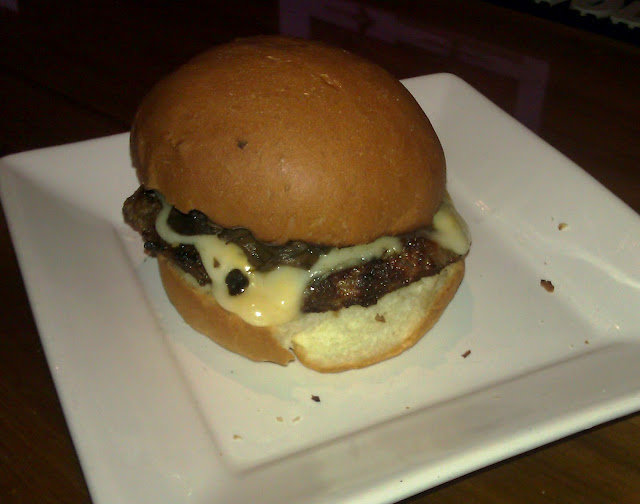 It was a slow Saturday, and I was still getting over what a weak suck of a film my idol, Ridley Scott had put out in the form of the newly-released Prometheus. Seriously, it was like watching the last season of Battlestar Galactica. I decided that a burger was just the thing to get all that behind me. I made my way the Westchester neighborhood of LA. This is an area that I usually blow through at a high rate of speed on my way to LAX. Tompkins Square Bar & Grill was the destination. It had garnered some attention here and there for the burger, and it was my duty to check it out. Free parking was provided in the small lot behind the establishment. Tompkins Square (or T with superscript 2) was a naming convention derived from the fact that two brothers named Tompkins owned the place. Isn't math fun?

I ordered a simple burger with the Swiss/American cheese option and mushrooms and BBQ sauce on the side. My burger was up in about 10 minutes.

The Beef: The burger beef at Tompkins Square Bar & Grill was interesting. There was a strong scent of aging, but none of that came through in the flavor. The cheeseburger tasted strongly of mineral, which led me to believe that this was more that mere Chuck. I did ask the staff, but the beef was a mystery to the folks on duty at the time. The burger was moderately beefy. The fat content was around 20%. The bite was moderately juicy, and it had just the right amount of oils. The grind was in the medium range--this created a burger that was tender with just enough resistance so the the bite was not sloppy.  The beef was above average but not spectacular.

The Seasoning: There was the faintest hint of salt on the exterior of the patty. More salt and some pepper were certainly called for here.

The Sear:  The sear was nominal at best. It provided no char or texture to improve the bite.

The Preparation:  Since the type of beef in the cheeseburger at Tompkins Square Bar & Grill was a mystery, I requested Medium. That request was bluntly ignored, and my burger came out closer to Well Done. It was still juicy, but it just wasn't what I wanted. Also, I made a point of ordering the mushrooms on the side. They arrived embedded in the cheese. I played "Operation" to get them out of the way. On the plus side, the burger was only flipped once on the gas-fired grill. Points for not fussing with it too much. I assumed that the 6-ounce patties were formed in-house during the prep cycle. A quick look into the tiny kitchen caused me to conclude that the beef was ground by the supplier. 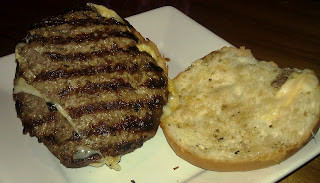 The Cheese: Ho hum. There were many cheese choices at Tompkins Square Bar & Grill, and went with the standard Swiss/American blend. Sadly, the cheese was much too bland, and it was lost in the bite. It contributed nothing in terms of flavor of texture.

The Toppings: My burger at Tompkins Square Bar & Grill was accompanied by mushrooms and BBQ sauce. The mushrooms had clearly been cooked at least an hour prior to hitting my burger. The BBQ sauce was unremarkable.

The Fries: The fries at Tompkins Square Bar & Grill were $5, so I passed. I concluded that the denizens of Westchester were doing far better than myself based on the egregiously spendy spuds. 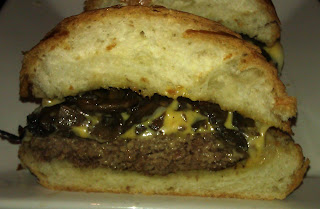 The Value: Ouch! The burger at Tompkins Square Bar & Grill started at $12 with no fries. I walked away spending over $18 on a burger, beverage, and the tip. The value was not good.

This was my first burger experience in the LAX region, and I truly hoped that this was not the best that the area. The burger was fine, but it was by no means worth a second look.

Burger Review : A slightly better than average, but overpriced, burger was served up at Tompkins Square Bar & Grill.