8 oz. Burger Bar has been on the list of cheeseburgers to review for the better part of a year, and I finally found room in my schedule to sample it.  What with the all of charity work, the continuous ultramarathon training, and all of the duties attendant with the title of "World's Most Handsome and Muscular Man," I had been swamped.

You know what I don't love--a waiter that doesn't act remotely interested in being a doing a good job as a waiter until he drops off the check--weak performance = weak tip. 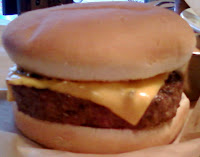 The Beef:  The beef burgers at 8 oz. Burger Bar were composed of a blend of Tri Tip, Short Rib, Chuck, and Sirloin. It was a little light on the sirloin--the beef had a great nose--the first impression was a wave a quality funk from the quality cuts. It was a sexy, steak funk rather than a skanky chuck funk, and that was refreshing for a change. Sadly, even at a bloody Med-Rare the steak and mineral notes did not shine through. The blend was about 75:25 beef to fat, so there was a fair amount of lip wiping going on during the course of the meal.

The Sear: They cooked the burger on a grill, which could have been at 20 degrees hotter to impart a proper sear. Nonetheless, the grill marks provided some good color but no real sear to speak of.

The Preparation: Med-Rare as requested. The beef was ground to medium coarse. The uniformly thick, flat patty was packed somewhere around the medium firm range. The mouth feel was firm, and since the patties appeared to have been prepped on the same day, it was not rubbery or stiff. 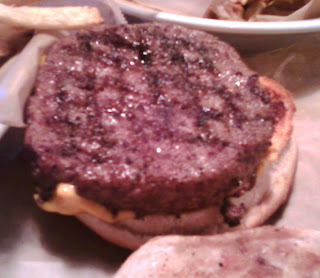 The Bun: The bun was just fine. It was a toasted, plain, white, unseeded hamburger bun. This bun had enough sweetness not to be bland, but it did not overpower the burger with strong flavors of its own.  The bun was at least a day old, so it was a hair on the stale side. It was sufficiently moist in the middle not to be an issue, though.  Additionally, this cheeseburger was juicy enough to compensate for that small problem.

The Seasoning: The outside was competently seasoned with a salty blend, while the burger blend appeared to have not been seasoned. Just a little salt in the mix would have compensated for the flavors left lacking by the meager amount of sirloin in the original blend.

Meat to Bun Ratio: This was perfect. They nailed this with the half pound patty, and it made me wonder if the smaller "Melrose" burger was served on the same bun.  The "Melrose" used a 25% smaller patty, which would have created a bun-heavy and dry dish had the identical bun been used. 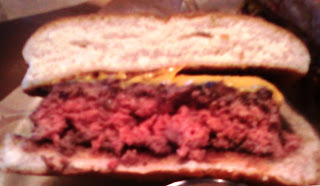 The Fries: The fries were fantastic. They closely resembled the peel-on, skinny, hand-cut fries served at Five Guys Burgers and Fries, but these were prepared so that the outsides were crisp and the insides were creamy. It was hard to stop eating these fries. They were woefully under-seasoned, but a generous dash of sea salt remedied that.

The Value: The meal at 8 oz. Burger Bar set my companion and I back $35 (before tip) for two cheeseburgers, 2 orders of fries, and two soft drinks. $17.50  was a lot for a simple cheeseburger. Given the choice between this and Umami Burger, I would go to Umami Burger. The value was not strong in this one.

Burger Review : The cheeseburger at 8 oz. Burger Bar was darn good--really darn good. It missed the mark by just a little in several areas, but it was a well above average burger. I will be trying this one again in hopes that they were having an off night.