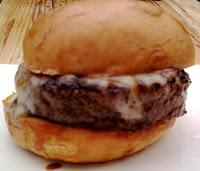 For the past decade, there was a so-so coffee shop in the Santa Monica Fred Segal--I know this, because I used to get my coffee there when I worked next door. I am intensely grateful that Umami Santa Monica was not open at that location back in 2000-2001, or I would be fantastically and magnificently obese. I mean assisted living, getting around on a scooter, needs help to pee, weighing in on a special scale, extra wide doors, reality show obese.

Umami Santa Monica was the second Umami Burger location that we have reviewed, and it was as good as the original Umami Burger on La Brea. The burger reviewed and pictured was the usual...bun, meat, and cheese.  Umami Burger's menu offered a variety of interesting topping combinations, but we are not in the habit of reviewing toppings.

The Beef: The various and flavorful beef cuts (short rib, flap, skirt, and brisket) were clearly well-marbled prior to being ground into  the medium coarse blend that became burger patties. The burger had a luxurious mouth feel from the fats and juices. The patty was precisely and evenly formed yet loosely packed. This created uniformity and avoided chewiness while allowing the texture of the various cuts to come through.  The blend also retained a nice volume of juices, which later soaked into the bun.

The Sear: Ta da!! The sear was completely even and dark. This was accomplished with top heat, lots of it, from a mighty broiler rather than the bottom heat of a griddle.


The Preparation:  Med-Rare as ordered. The beef was handled with great care. The amazing tenderness and perfectly even temperature was due to a sous vide treatment of the burger patty prior to searing it off on the flat top.

The Seasoning: Yeah--just right.  The burger patty was thoroughly seasoned on the exterior. The patty was thin enough not to require seasoning throughout the blend. Still, they clearly tricked out the blend with some extra umami ingredients, which made the cheeseburger's flavors really come together.

The Cheese: I went with the American cheese that Umami Burger made in-house. It was pretty fantastic. It melted perfectly and evenly. The flavors were creamy, sharp, mellow, and salty.

The Bun: The burger came on an evenly toasted, non-seeded, pillowy, domed, white, hamburger bun. I was pleased to see that they didn't oil the bun as they had on previous visits--I was never a fan of grabbing an oily bun. The bun had that "school lunch roll" sweetness with the yielding firmness of a potato roll.

Meat to Bun Ratio: This was just right. The precise meat to bun ratio provided a last bite, which was identical to the first bite.

The Fries and Tots: The skinny fries were as good as McDonalds made them back when they cooked their fries in beef tallow, and they were seasoned perfectly.  The Tots were more like cylinders of minced, au gratin potatoes with Cheddar, which were breaded in panko and then fried to a crisp golden brown and salted perfectly. Both starch choices were fantastic.

The Value: It was $10 for a fist-sized cheeseburger.  The richness of the dish and the quality of the ingredients supported that price. Win

Burger Review : The themes that ran through Umami Santa Monica were consistency and precision.  They truly shamed almost every other burger that we have tried in Los Angeles by executing everything perfectly. This was case of quality ingredients prepared with great care. If you have not tried Umami Burger, do it soon, because you NEED to try the best burger in Los Angeles.