The $16 Pug Burger was surprisingly tall when fully assembled. That was a bit daunting, because I did not wish to compress all of the juices from my cheeseburger. 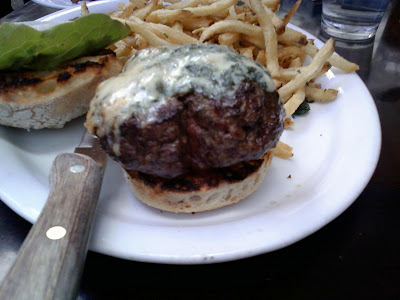 The Beef:  Niman Ranch Chuck--sigh--80:20 Niman Ranch Chuck.  It was a medium grind, and I ordered it Medium generate the flavors needed to overcome the blandness that I have come to expect of Niman Ranch burgers. It did have the characteristic front note of aged funk that Niman Ranch can be counted on to unswervingly deliver.

The Preparation: The beef was loosely formed into a barely flattened 5-6 oz. sphere. In spite having been pre-ground and shipped in a plastic tube from far away, the beef managed to retain it's meaty texture. Additionally, the burger was very juicy.  One of my dining companions had his cheeseburger with lettuce. The lettuce blocked the juices from being soaked up by the bun, and he ended up with "well-lubed" hands.

The Seasoning: They got a good hit of a salty blend on the exterior, and that was potent enough to make its way to the center with every bite. This level of seasoning on the exterior was completely necessary to compensate for the lack of seasoning in the blend and the fact that Niman Ranch Chuck is just plain bland.

The Sear: They got a rich, crunchy sear on the burger using a wonderfully hot grill.  The seared/cooked layer was deep enough to melt a sufficient amount of the collagen in the Chuck to impart a reasonably beefy flavor to the dish.

The Cheese: Bleu...only Bleu, so I had Bleu on my cheeseburger.  The Hungry Cat used an especially veiny version, and when it melted, the fatty part made its way down the sides of the spherical burger, and I was left with a pile of green mold. It looked like a clump of algae that one might find in a pond.  It tasted fine, though. The Bleu cheese had a fine metallic tang to it that compensated for the bloodless beef. This was one of those rare cases where Bleu cheese did not overwhelm the dish. One could argue that this dish required a potent and salty cheese to round out the flavor profile.

The Bun: When I first saw the smallish, grilled bun perched atop the burger patty.ball like a kid's party hat on an adult, I began to emotionally prepare myself for a greasy, wet disaster.  I was happily mistaken.  The mild, firm, rustic sourdough roll/bun was crusty and hearty enough to stand up to the daunting thick burger patty, which had to be compressed to eat--I was unable to unhinge my jaw to accommodate the 5 inch thickness of  the assembled bun-burger-bun stack. Amazingly, when I finished, there was not a drop of juice on my hands or my plate. The bun was remarkably capable.  It was mild in flavor, and its texture was half English muffin/half sourdough roll.

The Fries: They were thin, peel-on, and cooked in peanut oil.  The fries at The Hungry Cat were the best thing on the plate. They were wonderfully crisp, and they were properly seasoned.  Yum  Peanut oil really brings out the best in french fries--its high smoke point allows the fries to be cooked at a high temp, which creates a deep layer of dehydration (crust), which retains its crunch even as the dish cools. A thinner layer of crust, from a lower cooking temp, tends to more quickly allow the fry to become soggy and lank as the moisture inside the fry permeates the fried crust and re-hydrates it. 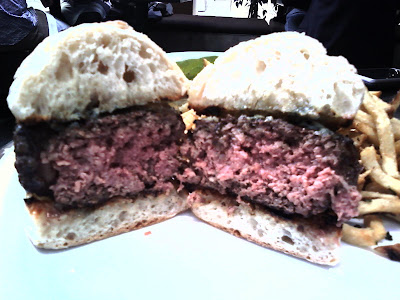 The Value: Meh...it was overly pricey for a pretty average tasting cheeseburger made from ground chuck.

On an excellent note: The bacon, which came with the burger, was smoked in-house in a little smoker across from us on the patio. It was rich and subtle--it was thickly cut and creamy with the perfect amount of salt and smoke.

Burger Review : The high-quality ingredients at The Hungry Cat, combined into a pretty tasty but unexceptional whole.  The cheeseburger was competently prepared, balanced, and tasty, but in no way worth the $16 price tag. 16 bucks...Get the chuck out of here. I would not return for this burger, but I would not steer anyone away if they were in the neighborhood.