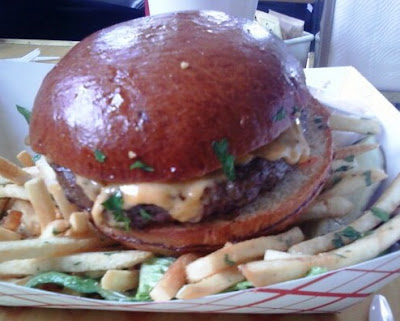 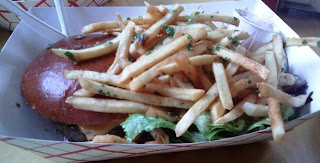 Fat Bruce Lee was on a diet, so it was my job to help him fail.  I needed someone to compare myself to so that I come out favorably, and I was not about to let his health concerns trump my vanity and need to feel superior. Remember, we eat hard so you don't have to--we chose an out of the way spot called Bluebird Cafe. Bluebird Cafe was in the hinterlands of Culver City, and it was further complicated to get there due to a light rail construction project. We went at lunch time--the place was only 50% full--there was free parking beside the restaurant.

We ordered a cheeseburger, and by "Cheeseburger" I mean a massive9 oz cheeseburger, a big pile of tasty fries, a salad (quality, mixed greens), and a cupcake...all for about $10..that's right 10 bucks.


The Burger Breakdown:
The Beef: The beef in the Bluebird Cafe burgers was 80:20, Angus, ground Chuck. It had no trace of aging. It was pleasantly, but not strongly, beefy. The burger patty was juicy and enjoyable. 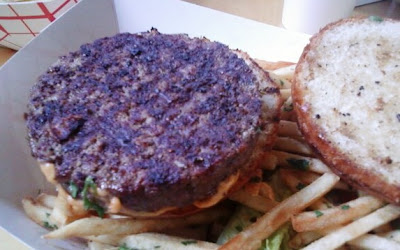 The Sear: KABOOM! The sear was crunchy, dark, and had a wee hint of carbon to remind us that man harnessed the power of fire for a reason. That reason was to get a sear onto the dead critters that we like to eat. Bluebird Cafe nailed the sear, and they did it on a gas grill.
The Seasoning: The burger was seasoned on the exterior with something salty and maybe just a little fiery like a hint of cayenne.  The seasoning was good.
The Preparation: The medium ground Chuck was firmly formed into large, thick, even, flat patties. The patties were gas grilled to Med/Med-Well. I had requested Medium, but they cooked them a little hard. This was not the end of the world, since Chuck can tolerate a little over-cooking. The beef was juicy enough to handle the cooking temp, too
The Cheese: This was a bland, rubbery, Tillamook Cheddar, which simply did nothing for the burger--it NEVER does. It really didn't melt, so it contributed nothing in terms of of texture since the cheese didn't properly combine with the meat while it was in the mouth. It was bland, so it contributed nothing in terms of savory or umami notes. The cheese was a pass. 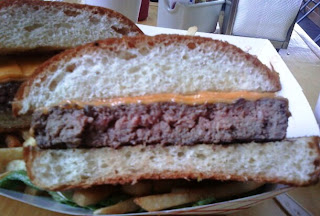 The Bun: They briefly attempted to toast the big brioche on the grill, but this didn't accomplish anything. The bun was cold and untoasted. Beyond that it was too dry, so it robbed the dish of moisture. I ate half of the burger topless, and the other half with no bun at all. Also, they oiled the top of the bun, and I hated the greasy feeling. The bun was a pass.
The Meat to Bun Ratio: There was too much bun.
The Fries: The shoe string-style fries were cooked in fresh canola oil. The fries were crisp, golden, and seasoned with flakes of sea salt, parsley, and bits of fried garlic.The fried garlic was mild, but it took the frozen, food service fries and made them great. I would have the fries again.

The Value: The value was gut busting. 10 bucks for a mountain of food--most of which was good. We never even got to the cupcakes, but we were told that they were delicious.
This was a slightly better than average burger with weak cheese and a weak bun. Had they used a decent bun and some American cheese, the Bluebird Cafe would have had a winning cheeseburger on their hands. The bun and cheese dragged the burger down to average in spite of the epic value. 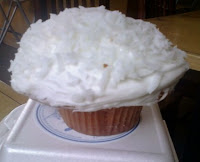 Burger Review : Bluebird Cafe served up an slightly above average tasting burger on a weak bun, BUT the value was tremendous, and the fries were excellent.
Burger Rating...3 Bites
Posted by Pete Neumann at Friday, January 07, 2011