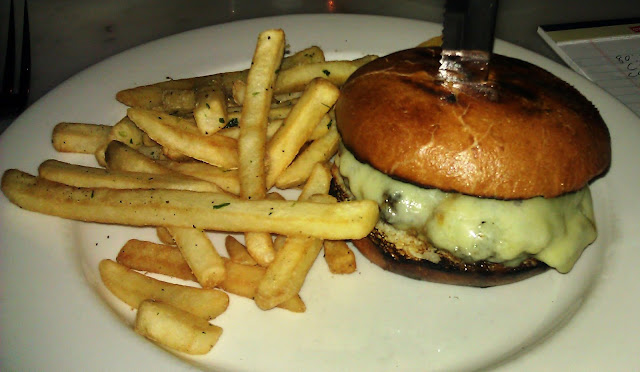 Fat Bruce Lee and I had just touched down in San Francisco, and our first stop was Fish & Farm on Taylor. Fish & Farm was attached to the Mark Twain Hotel. Fish & Farm's goal was to serve food made with ingredients sourced from less than 100 miles away. The beef was sourced from Niman Ranch, and this did not bode well--we've had plenty of Niman Ranch beef in Las Vegas and Los Angeles. This was a case of being pleasantly surprised.

The Beef: The beef was pre-ground Chuck. Since the Niman Ranch product didn't make a LONG trip to the kitchen, the beef was far, far better than what we had tried before. Typically, Niman Ranch has been insipid. In this case, the Chuck was pretty beefy in flavor. The burgers were not greasy, but they also leaned towards dryness. In fairness we didn't get them with the various toppings, which would have lent additional moisture. The beef did have a nice note of aged funk to it, but it lacked the complexity of a perfect burger. This burger would have benefited from Rib or Ribeye meat being cut into the blend. 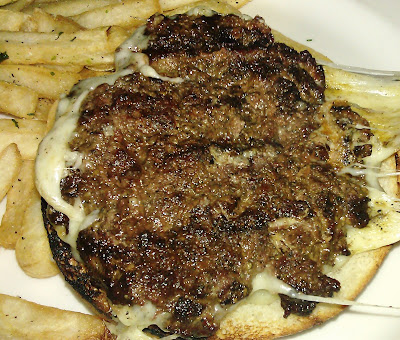 The Seasoning: Yes!  The seasoning was great.  They applied a heavy dusting of a salt and pepper blend, which really punched up the flavors.

The Sear: The sear was particularly impressive on the burger at Fish & Farm. This was accomplished on a gas-fired grill, which went to show what could be possible when a competent chef runs the kitchen. The sear was crunchy, dark, and deep.

The Preparation: The beef was ground to medium-fine, and it was cooked to a perfect Medium. The (7 ounce) patties were formed firmly enough to hold the beef together but not so much that they became chewy. The preparation was spot on.

The Cheese: The White Cheddar was sourced from Cowgirl Creamery. The Cheddar was genius. It resembled Gruyere in its creaminess and nuttiness. In addition to that, it brought the salt and iron notes that are customary in good Cheddar to the party. The cheese did tend to fill in where the beef was lacking, and it made for a solid flavor profile. 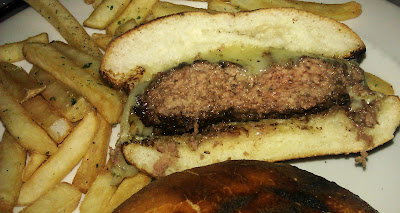 The Bun: This was sourced from Acme Bakery, and it was nearly perfect. The kitchen lacked a griddle, so the bun was grilled--top and bottom. This resulted in a little blackening of the top, and that gave us a slight and unpleasant scorched taste of bitter carbon at the front of the bite. The bun was wonderfully crunchy, and this provided a nice contrast to the chewy interior.

The Fries: The fries were peel-off, fresh, par-cooked, and a cooked to a light golden color. They could have been cooked about 30 seconds longer, because they did not maintain their crispness as the meal progressed.. That said, the seasoning was great. The salt was malt salt, and it was finely ground--this was also true for the pepper, which was a component of the seasoning blend. This was similar to the seasoning on the burgers, so the pepper theme carried through the meal. The fries came with an excellent barbecue sauce, which I was tempted to drink as a shot.

The Toppings: The Secret Sauce was a blend of mayo, ketchup, brandy, and green pepper corns. This was like In-N-Out sauce for grown-ups. The house-made pickles were vile, however. The cornichon pickles were vaguely peppery, very mild, and flabby. This was the only component of the meal, which fell completely flat.

The Value: This was a $14 burger, and it was darn good--it wasn't excellent. The value was fair.

We have been let down tremendously by other cheeseburgers in San Francisco, so the burger at Fish & Farm was a welcome change. This was a burger, which flirted with excellence. The ingredients and the execution would have benefited from a few tweaks, but it was a fine burger.