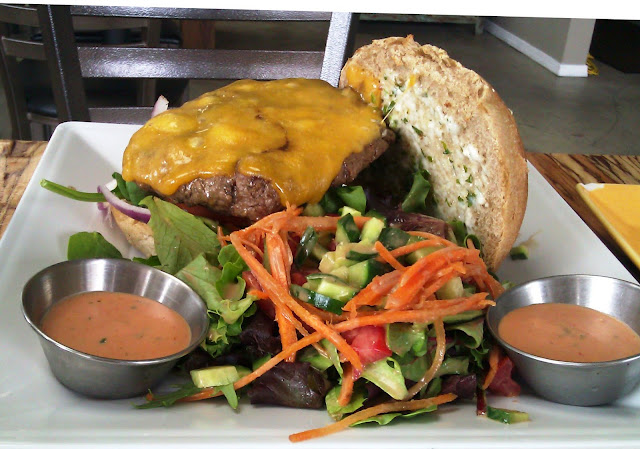 It had been a week since I had posted anything on an un-reviewed burger. Happy Meal and I had spent the better part of his Spring Break at Legoland, and we re-visited both Five Guys Burgers and Fries in Carson, CA and SmashBurger in Del Mar (San Diego), CA.  New pics are now posted on each of those reviews. Sadly, Five Guys was pretty bland, and SmashBurger just couldn't get a  good sear on the beef--they also applied too much salt--standards.. Oh well, at least those pics are better, now. I love the camera on my Evo Shift.  Oh, we also returned to Ruby's Diner in Carlsbad, CA--the standard cheeseburger there was exceptional, and the fries were superb.

The burger du jour was at Sauce On Hampton. The Chef/Owner Sassan Rostamian was formerly the lunch chef at Rustic Canyon, which we hear has a terrific burger. Sadly, whomever was working the grill at the time of this review did not share Chef Rostamian's passion for burgers and quality in general.

The hook at Sauce was healthy, organic, seasonal, and locally sourced ingredients served at a reasonable price point. Every bit of vegetation on the plate was marvelous. If only the burger and the bun had lived up to the accouterments. We ordered a couple of the "Classic, done right" burgers. These came with Cheddar and Applewood Bacon for $10 each. All burgers at Sauce On Hampton also came with tomato, baby spinach, red onion, house-made aioli, and Dijon mustard.

The Beef: The 6 ounce, grass-fed, patty was coarsely ground Chuck from Estancia Beef.  It was ground at the supplier and delivered fresh to the kitchen.  It was wet-aged and came in at a ratio of  80:20. It was wonderfully funky--too funky for Happy Meal, but I enjoyed it. It was only mildly beefy, and it was otherwise devoid of character. It lacked any deeper notes of iron and umami. The beef was on the dry side, and it was oilier than I was comfortable with. This dryness came from over-cooking the burger on a too-cool grill. Frankly, some of the oiliness would have probably dissipated with a properly hot flame. The coarsely ground beef was formed gently into thick patties, so the texture (barring the dryness) of these cheeseburgers was just right.

The Seasoning: There was a faint dusting of something salty the exterior of the irregularly shaped, hand-formed, burger patties. The blend appeared to have been not seasoned at all.

The Sear: Blah...1/2 of the burger picked up a sear and a touch of char from the hot spot on the cast iron grill. The rest of the burger could have done with a much hotter flame and a shorter time over it. 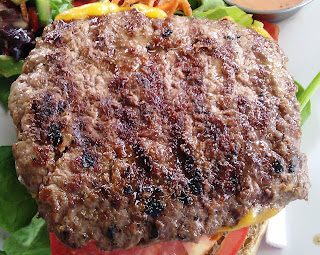 The Preparation: This was a comedy of errors. Especially considering that these were the "Classic, done right" burgers. There's nothing like a big serving of irony for Easter brunch...
The burger "toppings" were all placed beneath the patty--that promised to create a disjointed and confusing bite. The tongue with all of its taste buds, is located in the lower part of the mouth. A burger should start off tasting like meat and cheese rather than a salad. I prefer it when toppings are treated like condiments rather than as the star of the dish. Easy enough to remedy though...flip it over. 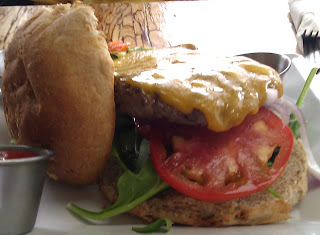 The Cheese: The Cheddar was gooey, salty, and sharp. The cheese outclassed the burgers in terms of flavor and texture.

The Bun: This was a whole wheat, oat-topped, barely toasted, dryish, burger bun. It was too big and too dry for the over-cooked, dryish burger patty. The bun looked sort of like the bun from the website. The bun was sourced with great care from a local bakery, which the chef kept a secret.

The Fries: No fries here.

The Toppings: Every bit of veg on the plate was delicious and fresh. I gave up on my cheeseburger at the halfway point and filled up on the copious salad, spinach, and juicy tomato slices. I found a reason to use the dressing that they served in lieu of the Dijon mustard.  The greens and tomatoes were absolutely fantastic. The thick slices of bacon were delicious.

The Value: It was 10 bucks for an OK burger, a dry bun, and a great salad.  The burger value was weak at Sauce On Hampton. 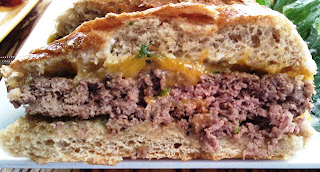 It was a lucky thing that Happy Meal had already filled up on Easter candy in the car, because he only ate about 5 bites of his burger. He did eat all of the bacon once it finally arrived. In fairness, the funk level of the beef made this an R-rated burger. It was good, but it was not the sort of thing that kids generally go for.

Later in the day, I had the opportunity to speak with Chef Sassan Rostamian, and he really came off as a terrific guy with a ton of passion about food--burgers in particular. The deep attention to detail with regard to beef suppliers, handling, and the remarkable quality of the produce were all quite inspirational. I have to imagine that the kitchen staff was largely responsible for the lackluster cheeseburgers that we had on this day. We will re-visit Sauce on Hampton at a time when we are certain that the chef/owner will be on hand and guiding the kitchen.

Burger Review : The burger was prepared carelessly. This cancelled out the superior ingredients and resulted in an average burger.

Editor's Note: We revisited Sauce On Hampton on 05AUG11, and we discovered a much-improved burger. Chef Sassan was in the kitchen, and he brought his A-game.
Posted by Pete Neumann at Sunday, April 24, 2011