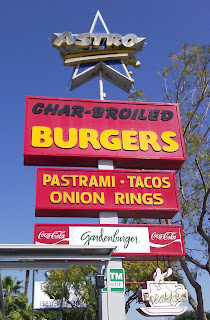 Happy Meal and I had just watched the matinee showing of Rio: The Movie...the most kick-ass, animated Blue Macaw movie ever made, and he declared it burger time. It was one of the first really perfect days of the year in LA, and the whole world was driving around. We opted for Astro Burger on Santa Monica Blvd...it was close. Parking was free in the back. We ordered a couple of single (4 ounce) cheeseburgers, a side of fries, a side of rings, and a large beverage. This set us back about 15 bucks.  We settled in for a 10-minute wait until they called out our number. The place was all gleaming tile and chrome on the interior.

The Beef: The claim was that the beef was not previously frozen, but it was joyless and bouncy enough to suggest otherwise. It was 80:20 Chuck. The only flavor that it lent to the bite was moderate beefiness. The patties were on the dry side, and they were a little rubbery, as well. The patties were dry enough that they curled at the edges as they cooked. 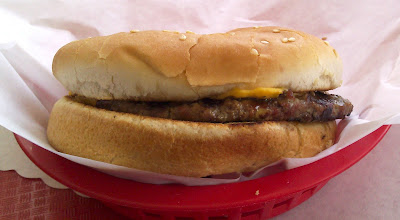 The Seasoning: This was undetectable. This burger was in dire need of seasoning.

The Sear: There was no sear. The gas grill scarcely got any color on the burger patties. The exception being the curled edges, where a bit of char was present.

The Preparation: It seemed unlikely that a human was involved in creating the medium grind, thin, uniform burger patties. The beef was cooked on a gas grill to Med-Well. The Astro Burger marquee boldly proclaimed the burgers were Char-Broiled. That was misleading, since there was no broiling equipment in evidence and certainly not in use.

The Cheese: The cheeseburgers at Astro Burger came with standard American Cheese, but even this old standard failed to amp up the flavors. The American Cheese had to fight with bland, unseasoned beef and a too large bun.

The Bun: This was a lightly toasted, seeded, standard, hamburger bun. The bun was moist enough and neutral in flavor. Happy Meal got his cheeseburger with pickles and ketchup, and his bun fell apart within three bites. The buns at Astro Burger were not substantial enough to support toppings.

The Meat To Bun Ratio: See photos...the bun was massive compared to the thin burger patty.

The Value: PASS. I would not return to Astro Burger. The food was of a low quality yet they charged a moderate price. The value was poor. 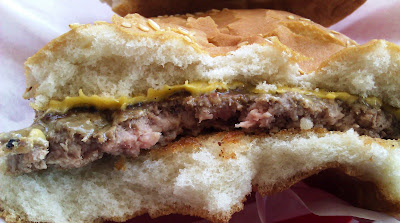 Astro Burger....this was a weak burger, which was barely worth reviewing. They were fortunate that an even worse burger (Fatburger) stood on the opposite corner. Astro Burger was superior to Fatburger, but it was still not good enough to warrant anything better than a mediocre rating.

Burger Review : I am glad that's over with. 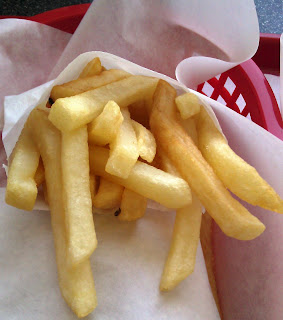