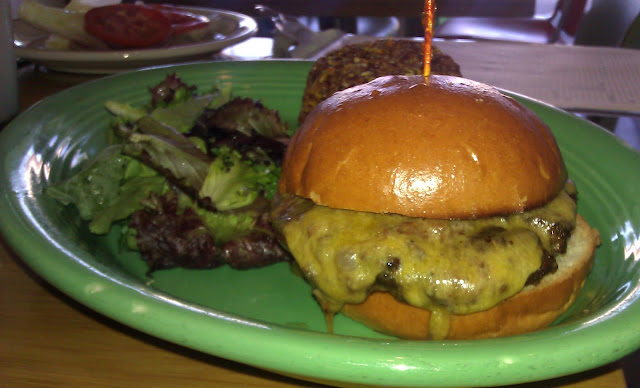 Bloom Cafe had been recommended to me by someone. Fortunately, I had already forgotten who suggested this spot, because this was not a happy experience in terms of burgers, service, freshness, accuracy of the menu, or...anything.

Happy Meal and I found metered street parking less than a block away. We were seated promptly in the 1/4 full restaurant. We ordered a a couple of Grass Fed 8oz Burgers, and then we settled in for a 25-minute wait. Our waiter, rather than checking on the status of our order was occupied with texting....neat. When our cheeseburgers finally arrived, mine was cooked to an blistering Well-Done. I sent it back with a request to deliver the re-fire in less than 25 minutes. Our waiter proclaimed. "I do not work in the kitchen." Our waiter was not very good at his job.The kitchen managed to get out the second burger in 15 minutes. That was a 40-minute wait for a burger. I took a few bites and realized that the burger was scorched, and the toppings and sides were of such low quality (rotten and cold) that I could not have taken even one more bite. Upon noting my clear displeasure, the waiter: "What is wrong with it this time?" I provided the top three reasons why the burger was inedible, and again the reply, "I do not work in the kitchen."

The Beef: Bloom Cafe proudly announced that they served grass-fed beef. What I tasted was greasy, bland Chuck. It was not remotely beefy in flavor. There was not a single hint of aging, minerals, or anything interesting in the burger. What I did get was a overwhelming note of carbon, which told me that my cheeseburger had been sitting in the smoke of its own burning fat as it cooked. The fat content was about 25%. The grind was medium. Based on the quality of the preparation, I promptly lost all interest in the origin of the beef. The kitchen did not care enough to prepare to food with care, so it was safe to assume that the ingredients were nothing special. This was an oily, bland, scorched mess.

The Seasoning: If bitter carbon was a seasoning, then Bloom liberally seasoned the hell out of the exterior of my burger. I detected a faint note of salt on Happy Meals less jacked up cheeseburger. The seasoning was weak and careless.

The Sear: Bah! The burger received some average grill marks.

The Cheese: Bloom Cafe offered Bleu, Swiss, and Cheddar. I went with Cheddar. It was bland, and it was lost in the greasy, scorched beef of the burger patty. 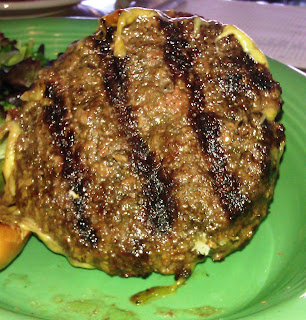 The Bun: This was an average and bland brioche. The bun was meagerly toasted. It seemed that 15 minutes was not enough time to cook a Medium burger AND toast a bun. I was not a fan of the oily exterior of the bun...the burger was greasy enough.

The Meat To Bun Ratio: This was probably fine, but I lost track during the avalanche of failure.

The Topping and Sides: This was even more appalling than the service or the poor quality of preparation. The "Live Lettuce" was, in reality, the past-its-prime, brown-veined center leaves of a head of Iceberg Lettuce. The tomato was rubbery and bland. That was as good as it got. The side salad that came with the burger contained rotten, blackened bits of greens. This was indicative of being in the bag for too long and being served by a staff that did not care. The brown rice that I opted for in lieu of fries was cold in the center. BLEAK.

The Fries: Shockingly, the fries were pretty good. They were crisp and nicely seasoned.

The Value: The cheeseburger at Bloom Cafe would have been an awful value at $1. At $10, it was simply offensive. My burger was comped, but this was still an utter waste of time and gas.

Bloom Cafe didn't set the bar low--Bloom Cafe threw the bar on the ground, and then the Sunday crew tunneled under the bar as if to perform some sort of subterranean limbo. Bad ingredients, bad service, and bad preparation all led to an inedible burger.