I've been to Dear John's before, but I hadn't gotten around to reviewing the burger until now. Dear John's could have been called retro, but it has always been that way. That would be like referring to a rock as retro...Dear John's was just old and unchanged. It was 100% old man bar. In defense of my Father of the Year award, I took Happy Meal along for the burger. We ordered a couple of the 1/2 Pound Gourmet Burgers and settled in for a 20-minute wait as our burgers cooked. 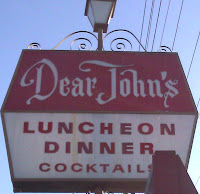 The Beef: The menu announced that this would be 1/2 pound of ground Sirloin. The menu did not lie. The beef was a very nicely aged Sirloin. My burger was recklessly overcooked, but it was still quite good. The beef was juicy. The fat content was at about 15%. The burger had a strong funk from the aging (dry?). The flavor was beefy, funky, and steaky, with a solid hit of iron to back it up. The bite was firm and the beef remained on the palate well after the bun had moved along. I would have sent my burger back for a refire, but I didn't want to keep Happy Meal waiting another 20 minutes for a properly cooked burger.

The Seasoning: There was no seasoning applied to the cheeseburgers at Dear John's. A little salt and pepper would have gone a long way with the high-quality beef.

The Sear: I found the lack of sear puzzling. The kitchen managed to cook that thick, 1/2 pound patty all the way through, but they couldn't get a proper sear on the darn thing. First crop circles, and now this....we truly live in an age of wonders. 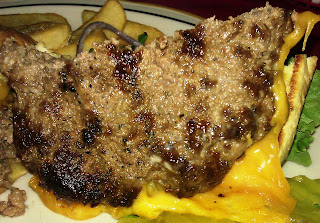 The Preparation: Dear John's cooked the burgers on a gas-fired grill rather than a flat top. The grill was far too cool to apply a proper sear. The staff formed the formidable beef patties during the morning prep cycle. The ground Sirloin arrived pre-ground. Discovering the source of the beef proved to be too challenging for my limited Spanish skills, because this was an ESL situation. The burgers were formed gently, and the resulting mouth feel was firm without being chewy.

The Cheese: Dear John's doubled up on the Cheddar for us. We could have gone with Bleu or Swiss, but we didn't want our burgers to, you know.....suck. The Cheddar was meek. It did provide a little gooeyness to the bite, but that was it.

The Bun: The bun was standard, food-service, lightly-seeded, fresh, moist, slightly sweet offering. It was squishy like a school lunch roll, and this was not at all unwelcome. The bun did its humble part of getting ground steak into our faces without soiling our hands. Sadly, the bun was barely toasted, so it lent nothing in terms of crunch. It seemed that 20 minutes was not long enough to toast a bun. 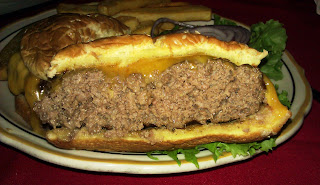 The Toppings: Everything here was perfectly fresh. The Romaine lettuce and the tomato slice were just right.

The Value: $12 for 1/2 pound of ground Sirloin and some fries was a great value. Where we got screwed was on the beverages. We spent $8 on Diet Coke. We were not informed that soda refills at Dear John's were not refills at all. 2 bucks for a Diet Coke was a thumb in the eye. 8 bucks was a knee to the groin. After tax and tip, we were out about 40 bucks. $40 for 2 cheeseburgers was nearly offensive.

Burger Review : Dear John's served up terrific beef and large portions. If you go, beware the beverage prices, and really drive home with the wait staff how you want your burger prepared.