Today in the BurgerBusters test kitchen located in a heavily guarded bunker--buried deep in the bedrock of Los Angeles--think Cheyenne Mountain, but with a better equipped kitchen and fewer Army guys--a new level of SUPER AWESOME was unleashed. 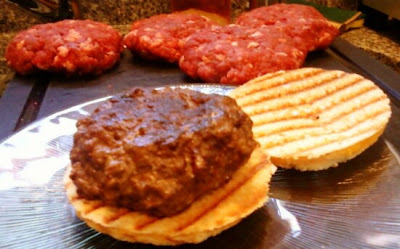 I was inspired by that lame looking, Carl's Jr. grilled cheese burger, so I decided to make it good.

I coarsely ground some partially trimmed, top sirloin, gently mixed in salt and pepper, formed it into thick loosely packed patties, and seared them in a blazing hot, cast iron skillet to to Med Rare. I let them rest for 10 minutes. Anything beyond Med Rare, and the lean patties would have been dry.

The bun was a grilled cheese sandwich made using Orowheat Buttermilk bread--sliced thinly with a slice of American cheese and pressed flat using a pannini press to grill it into toasted, cheesy perfection.  The "buns" were trimmed to size using a coffee mug.  This technique also sealed the edges.

The assembled end result--AWESOMENESS.  It was a Med Rare steak and a grilled cheese sandwich in the same bite.  It would have been hard to eff that up. 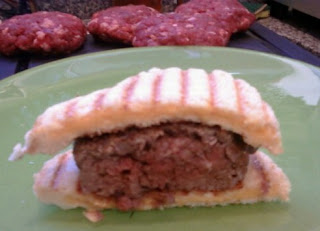 Burger Review : Epic Win--I needed a nap. Also, the 6-year old Burger Buster (Happy Meal) approved. After taking his first bite, he looked up and said, "Dad, when I grow up, I want to be just like you." He ate it without condiments. Those were two of the highest forms of praise.