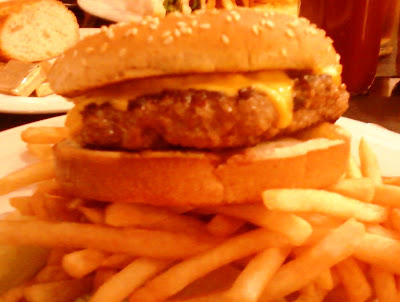 In the exhaustive quest to power through ALL of the cheeseburgers in our vicinity, TheBurgerBusters went to the restaurant inside Bloomingdales at the Century City Mall.  One would expect a very poor burger considering that it's from a restaurant inside of a department store and that it's a restaurant, which caters to women.  In this case one would be wrong.
What you can't see in this picture is a legendary seared crust on this 1/2 pound of perfect Med Rareness.  The bun was toasted on both sides, which, in this case, made for a satisfying crispness to complement the seared crust and the raw beef. If only they had seasoned it.  It was good--it was competently prepared--the beef was of a high quality (aside from the bone fragments that I found)--but they didn't season the frigging thing. SALT AND PEPPER--it makes all of the difference in the world. 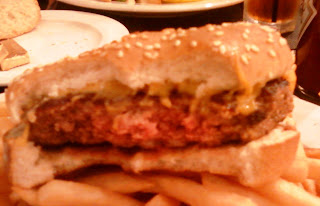 Still, this was the second best burger in Century City--The Stand is the best. Keep in mind that this is a ranking without any distinction.  It's like being the most moral whore in Delaware or the most virtuous Boy Scout.