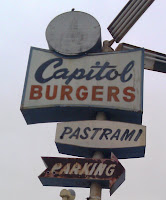 Fat Bruce Lee, ChiBurger, and myself had just read the LAist.com burger ratings, and they touted Capitol Burgers as the second best Basic Burger in Los Angeles for 2 years in a row. They had also ranked Apple Pan and Oinkster in their top 5, and those were two of the least impressive cheeseburgers that we had tried in LA. It was time to either confirm or debunk this claim. Remember, we eat hard so you don't have to. 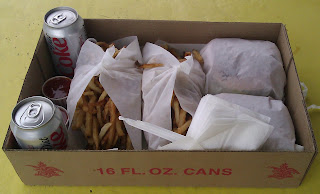 Parking was free in the lot behind the stand, and the seating was outdoor only at an assortment of tables under an awning attached to the burger stand. For 2 double cheeseburgers, 2 orders of fries, and a couple of cans of Diet Coke, Capitol Burgers dinged us for about 12 bucks. What we got was a gang of food. It was enough to feed 4. ChiBurger ordered a chili dog and chili fries, since he could eat anything...skinny bastard.

The Beef: The tiny patties were formed from Chuck, which was on the bland and chewy side. The beef was truly unremarkable. It was not bad in any way, it simply was average. It was moderately beefy, and beyond that, it really brought no other flavors to bear. The beef was relatively juicy, though. 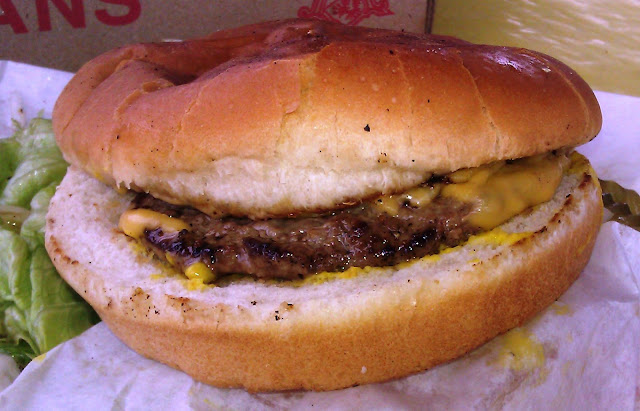 The Sear: Capitol Burgers got a hint of color on the thin burger patties from the griddle, but the patties were so small and thin that searing them would have dried them out completely.

The Preparation: The beef was ground at a medium setting, and the burgers were cooked to a moist Well-Done. The beef had been handled enough to become a little chewy, but it was not rubbery. This resulted in enough chewiness to compensate for the diminutive (4 ounces...maybe.. before cooking) amount of beef in the patties. The cooked the burgers on a griddle, but it was not nearly hot enough to get a sear on the beef.

The Cheese:  Hell yes!  These were CHEESEburgers.  The generous slices of American cheese melted throughout the dish so that the cheese was the consistent note throughout. It was rich, gooey, savory, and just plain satisfying. The volume of cheese compensated for the meager beef in a good way.

The Bun: The bun was an innocent bystander, and its only task was to keep the melted cheese off of our fingers. The bun was a plain, barely toasted, flabby, moist, burger bun.  The bun was adequate.

The Meat to Bun Ratio:  The bun looked way too big for the burger, but it was soft and moist enough to compress to the point where the ratio was spot on.

The Fries:  Meh...the fries were perfectly seasoned, but they arrived in a big moist wad, so that they quickly became lank and uninteresting. 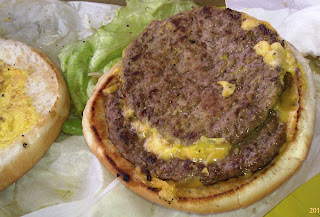 The Chili:  Damn, that was some tasty chili. ChiBurger made the right call when he ordered a chili dog with chili fries. The chili was savory, perfectly seasoned, and full of chunks of tender Sirloin.  I would go back to Capitol Burgers for that chili.

The Value: Boom!  12 bucks for the works for 2 adult males, and neither of us came close to finishing our food.

We have no idea why LAist.com rated this as one of the best burgers in LA. That notwithstanding, Capitol Burgers served up some very adequate and very cheesey cheeseburgers for an excellent price. 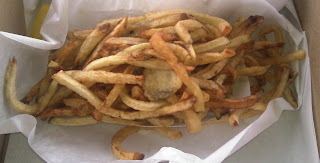