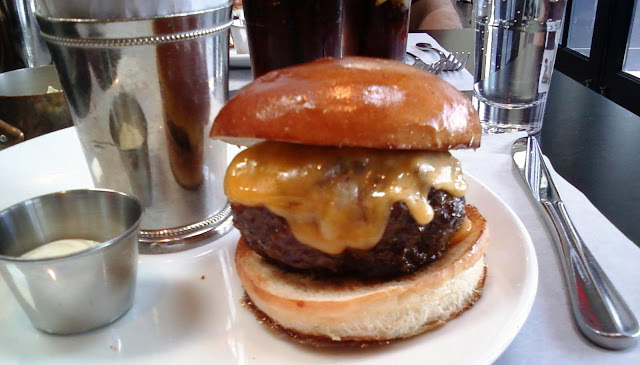 It had been a little over a year since the last visit to Comme Ça, and I was in the neighborhood--I needed a couple of $150 t-shirts.  Comme Ça had since swapped out chefs. They lost Michael David (we lost), and they replaced him with Sous Chef, Dong Choi, and then they went with Eric Samaniego for the role of executive sous chef--he was formerly the sous chef under Dong Choi.  I was curious if the current rendition of the Comme Ça burger was as good as the amazing burger that they served when Chef David was at the helm ...it was not even close. It was like the wheels fell off at Comme Ça when it came to the cheeseburger and fries. A popular translation of "Comme ci--comme ça" is "Could be better--could be worse. Chef Samaniego and team made it a point to show us worse...much, much worse. 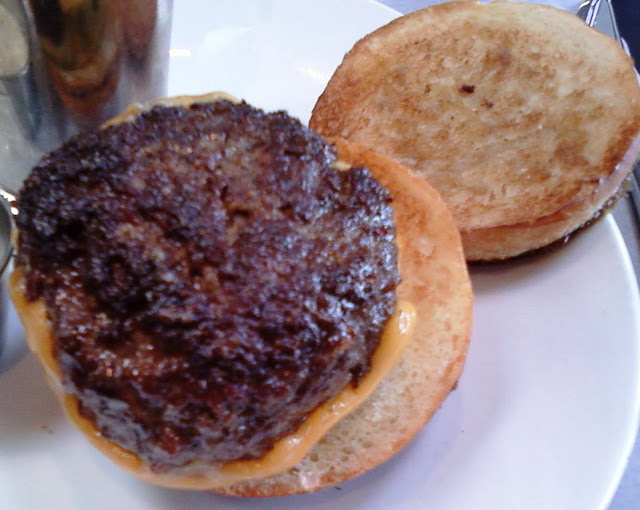 The Beef: The burgers were comprised solely of unbelievably greasy Chuck. Greasy, as in I had to wash my hands twice to feel normal again. Greasy, as in I couldn't stop wiping my lips. Greasy, as in I could have swallowed a pine cone with a pea gravel chaser and not felt it on the way in or out. The overwhelming greasiness also generated a couple of cases of heartburn. The beef was funky from aging, and that's what the dish led with.  What the bite ended with was a startlingly heavy flavor of iron. It tasted like a nosebleed, and that iron aftertaste persisted for 20 minutes after we finished. Unsettling.  Gone was the delicious Chuck, Brisket, Rib blend of a year ago.  The comedy was when I asked the server what sort of beef they were using, she came back and replied with "...single-cut shoulder steak."   That was the theme at Comme Ça...take mediocre ingredients, tart them up, and overcharge for them.

The Sear: BOOM! They got a really nice, crisp, and dark sear on the thick (7 ounce) patty by cooking it on a hot griddle. The sear was great, and it added some very nice flavors to the dish.

The Seasoning: They seasoned the exterior but not the interior, and in the case of Chuck, it would have been appropriate to hit the blend with a little salt to amp up the otherwise flat flavor profile.

The Preparation: The medium ground beef was loosely formed into thick (nearly spherical) patties and then seared on a hot griddle. Due to the oiliness of the beef, these burgers sat in pools of hot grease while cooking, which made the sear quite even. Sadly, my request for Medium was ignored, and I got a very bloody and very greasy wad of ground Chuck. Maybe they cooked the burgers on an unseasoned cast iron skillet--that would have accounted for the brutal iron aftertaste.

The Cheese: This was just another way to deliver more cholesterol without adding flavor. The mild Cheddar did nothing for the dish in terms of flavor or texture.  Gone was the sharp, flavorful Cheddar of a year ago.

The Bun: The buns were actually perfect for this burger..almost. Since the theme at Comme Ca was "Grease", the buns were coated in a thick oil to guarantee that we felt as greasy on the outside as we did on the inside. The bun tasted like a cross between Texas Toast and Wonder Bread, and that was OK. The bun was also nearly stale, but that dryness quickly went away as the burger juice and grease flooded the bread. A less stout bun would have collapsed and fallen apart. I attributed this harmony to luck rather than planning. Gone was the perfect, delicate, and NON-GREASY bun of a year ago.

The Meat To Bun Ratio: It was heavy on the bun side--why did they ruin that, too.

The Fries: Yech...I had them try twice to deliver fries that were crisp, and twice I got fries that were lank, wet, pulpy, and unseasoned.  They browned up nicely, though. Our server reported that the kitchen told her that during the Winter potatoes are too starchy to crisp up well. That was, of course, total BS. When live, whole potatoes are stored cold (below 50 degrees Fahrenheit), they convert starch to sugar. This causes them to caramelize far more deeply when cooked/fried. Why in the hell was the kitchen serving fries that they knew would be limp and substandard? They could have just as easily chipped them and served perfectly edible and flavorful starch in an alternate form. Or..or, they could have also sourced potatoes from a vendor that stored potatoes in a temperature controlled environment...sigh. Ideally, potatoes for frying and chipping should be stored at 60-70 degrees Fahrenheit.

The Value: 16 bucks for a greasy wad of undercooked, iron-heavy Chuck with awful fries...NO.

Comme Ca was one of my favorite burgers in LA. I will not go there until they change chefs again. They changed everything that was good and made it bad or mediocre. The bun, the beef, the cheese, the fries all have all suffered dramatic drops in quality. I miss the old and delicious Comme Ca cheeseburger, which  in 2009 was proclaimed this to be perfect burger by the New York Times.

Burger Review : Comme Ça went from hero to zero in about a year. Pass on this place until they sober up and bring in a better chef that gives a damn about good ingredients. What they saved in food costs, they will more than lose in repeat business.