Things had been way too healthy at the world headquarters: whole grains, antioxidants, running the stairs, and what have you. It was time that Fat Bruce Lee and I undid some of that hard work and packed in some beef fat.  We'd heard good things about The Laxy Ox Canteen, so we had our man, Chiburger (what's the Korean word for Kato?) get us down to Little Tokyo pronto.  Parking was abysmal, so we shelled out 6 bucks to deposit our car for 60 minutes. We started with the Fried Pigs Ears, which were phenomenal, and we had the Crispy Surf Clams, which were nothing special.  We ordered a bunch of $14 burgers, and it went something like this: 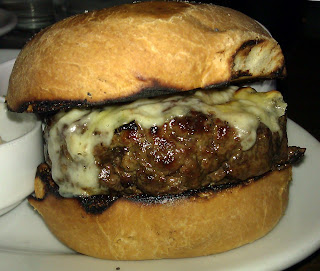 The Beef: The claim was of a 7 ounce burger, but I think that was overstating the portion size--this was a glorified, largish meatball on a bun. Note that the burger was photographed beside standard ramekins, so one could note the scale.The burger meat was a blend of Brisket, Rib Meat, and Pork Fat.  Yes, Pork Fat!  In spite of that superstar lineup of fat and protein, what we got was a really pleasant burger. I had hoped that the flavors of the beef, blood, and fat would come roaring in like an ax-murderer. Instead, the flavors were decidedly delicate, and the pork fat served to smother/mute the beef--it was a case of  2 plus 2 equaling 2.5. Aged steak fat would have been a bolder and more satisfying choice. There was some aging present, but this, too, was subtle at best. The burger was juicy--really juicy, and that was a huge plus. The beef blend in The Lazy Ox Canteen cheeseburger was quite good, but it was not great.

The Sear: Yawn--the sear was practically nonexistent. This was particularly disappointing, since the pork fat could have provided so much crunch. They managed to get more color onto the bun.

The Seasoning:  They ever so gently applied a miserly portion of seasoning to the exterior of the burger, but this was not enough to make it pop.

The Preparation:  The beef was ground to medium, and they cooked the thick patties to a PERFECT Med-Rare.  Sadly, the burgers were grilled rather than griddled, so all of that pork fat wasn't used to develop a crunchy and satisfying crust. The beef was properly handled, so the patty was toothsome in spite of its thickness. Again, it was a darn good burger, but it failed to make the leap to great.

The Cheese: This was Cantal cheese. It sounded fancy, and maybe it would have been a big deal on a cheese platter, but it fell flat on the burger. It was a silent passenger.  It lent no salt, funk, umami, or creaminess to the dish.  A booming, salty, Vermont, white Cheddar would have done the trick here. The mild Cantal was way too subtle, and it was in far too meager a quantity to add any flavor or texture.

The Bun: This was a house-baked Brioche-style, poppy-seeded bun. It seemed a little dry, but when the pornographically moist burger added its juices, the bun matched the burger perfectly. The best part of the dish was the sopping wet, bloody, juicy bottom bun.

The Meat to Bun Ratio: It was just right. 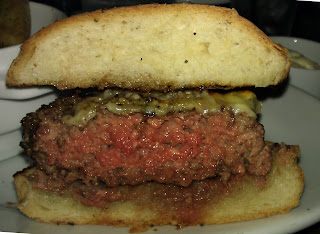 The Fries: Damn, those were some tasty fries. They were thick-cut, crisp cylinders of mild potato creaminess. They were perfectly cooked and seasoned with just enough dill to make them memorable.

The Value:  14 bucks for a small burger, which did not blow us out of the water and some truly excellent fries.  The value was so-so.

Burger Review : The Lazy Ox Canteen delivered a very good but not a great burger. All of the flavors were muted, so this cheeseburger ended up tasting just a little washed out. A solid sear, some seasoning, and a hearty cheese would have made this a burger to remember. Don't let the pictures fool you.  I just got that kick-ass new HTC Evo Shift, and it has an AMAZING camera. 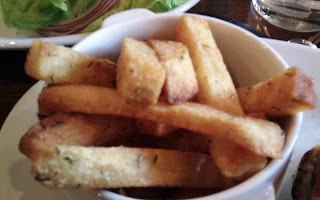