Happy Meal and I had a zoo date, but we also had a powerful craving for a juicy burger. It turns out that there was a place called Juicy Burger on the way to the zoo. Juicy Burger was rated Best Burger in LA by Citysearch. There was just no FREAKING way that Citysearch would have steered us wrong.

It was our queue to walk out when this conversation went down: 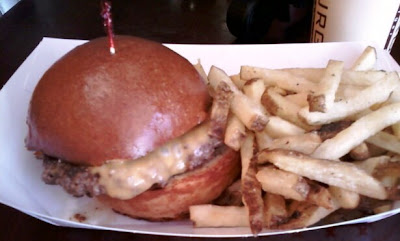 Attendant: How would you like your burgers cooked?
Me: What cut of beef are you using to make the burgers?
Attendant: Uh, beef....
Me: Excellent! What sort of beef?
Attendant: *looks confused--goes back to kitchen for a moment--returns* Premium.
Me: That is also not an answer to my question. Please cook the burgers to Medium.

Other words that would have been equally useless in describing the cut of the beef used in the grind at Juicy Burger would have been Orangutan, Tire Fire, and Internet. Maybe it was his first day, and Juicy Burger's tag line of "A Premium Burger Bar" was something better explained to new hires after their 30-day probationary period.  Regardless, it seemed safe to assume that it was a Chuck burger. The ordering routine was just like The Counter--check the boxes on a slip of paper and hand it over to be prepared. We went with the 1/3 pound patties on burger buns with American cheese.

The Beef:  If by "juicy" they really meant "greasy", then Juicy Burger served up some amazingly juicy burgers. The cut had to be Chuck, because it was only mildly beefy with no other flavors in the mix.

The Sear: The sear would have been great, but they probably covered the burgers while griddling them, and this caused the patties to cook in their own steam. The steaming process created a grayish, rubbery sear. No crunch--just a leathery layer of beef over an over-cooked, greasy center.

The Seasoning: Juicy Burger covered the patties in something resembling powdered onion soup mix. This resulted in a very heavy salt flavor, which even further served to obscure the mild flavors brought to bear by the insipid beef.

The Preparation: Juicy Burger used Medium Coarse ground Chuck. The hand-formed patties were packed loosely The burgers were griddled/steamed to a nearly impossibly greasy Well Done.  Well Done was far beyond what I had requested.  Looking back, I am thankful that they disregarded my request, since the over-cooking process rendered off some of the copious fat from these cheeseburgers.

The Cheese: We requested American cheese, and we got American cheese--it was fine. The flavor was generally lost in the over-seasoning, and the texture was lost due to the huge bun.

The Bun: Oof. It was a BIG brioche. No, it was a BIG, greasy brioche. No, wait...It was a BIG, greasy, leathery, bland, and dry brioche. They oiled the top of the bun to make certain that the burger was unpleasant in the hand and the mouth. The bun was just leathery and dry...and it was huge. I threw half of it away, and I regret not throwing away the other half.  This horror show composed of yeast and flour was too damn big for the 1/3 pound burger patty, and it would have been too big for the 1/2 pound burger patty. 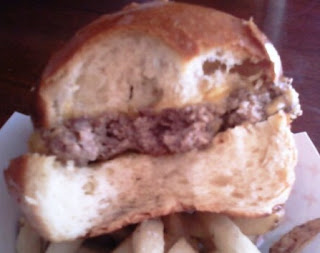 The Meat To Bun Ratio: See the photos.

The Fries: The fries were fine. They were, sadly, the best thing going at Juicy Burger.

The Value: $18 bucks for a couple of  greasy Chuck burgers, a side of fries, and a couple of drinks....not great--not even OK. Why, Juicy Burger, why?

Burger Review : Juicy Burger = Fail Burger.  If you have not gone yet...don't. This was like a dirtier version of The Counter with slightly better burgers.