Like  most of the people that I knew in high school, The Counter has lost its appeal and grown fat, lazy, and bland. 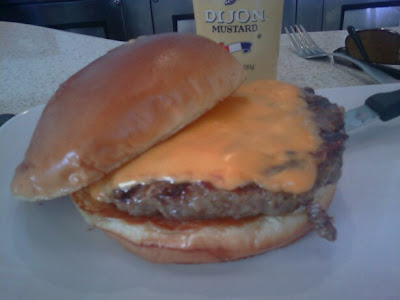 Today, Colonel Mustard, Side Of Fries, and I went back to The Counter to revisit what we recalled as a damn, fine cheeseburger. It was like going back to hook up with an ex--about an hour into it you realize all the reasons that you broke up, and you discover new ones. Ready...Set...Terrible!

I ordered my burger 1/3 lb, Med Rare, plain "hamburger" bun, and a slice of American cheese. I used the handy, "foolproof," ordering system, where one is required to specify the burger parameters, in writing, and hand it into a server for prep and delivery. This menu promised the beef to be antibiotic and hormone free--the special surprise was that it would also be flavor-free and texture-free, but I have gotten ahead of myself.

Mine showed up with Swiss--I sent it back.  It came back moments later, and by "it" I mean the same, freaking patty.  First, I noticed that the plate was a mess--there were bits of food and liquid on the plate, which seemed to have nothing to do with my cheeseburger. This time the cheese was barely melted, and I noticed a bit of melted Swiss on the bottom bun....hmmm.  I peeled back the unmelted, American cheese slice to reveal thin lines of Swiss cheese, which indicated that someone had used their fingertips to scrape off the Swiss cheese from the patty and put a cold piece of American on top of it.  GROSS. I sent this one back, too. It was a douchetastic, shockingly lazy, and sloppy move by an incompetent kitchen staff that had no concept of quality.

After a few more minutes, the burger that I ordered showed up....I guess...I mean, who could know after the last thing that happened.

The Burger Breakdown...
The Value:  On the plus side, they acknowledged the preparation blunder and comped my burger.  On the minus side--I could only eat half of it, because it was mealy, wet, bland, and greasy--unpleasant. At a price of $0, this was still a bad value. At a nearly $7 price tag, the value was awful.

It was clear that The Counter has failed to manage its standards while increasing the number of its locations via a franchising strategy.  The Counter being a franchising operation is really a real estate company that happens to help its clients pay their rent and dues by purveying crappy food to the public.  It has become an overpriced McDonalds without the toys or the quality control.

Burger Review : If you remember The Counter when it was good, don't go back. If you have never been to The Counter, don't go.