New Name....... M Street Kitchen
2000 Main St.
Santa Monica, CA 90405
310-396-9145
La Grande Orange Website
Today, I headed back to La Grande Orange in Santa Monica to re-sample the first cheeseburger that I tried in LA about a year ago. The last time that I went, the service was awful; the bun was a spongy monster; and the burger was bland and greasy. The cheeseburger was so blah, substandard, and disappointing that I didn't bother taking the time to review it. I hoped that things would take a turn for the better this time. Some foreshadowing occurred prior to our food arriving...Terry O'Quinn from Lost walked by our table...that set the tone for changing the past...partially....as on Lost....one can never truly escape one's past.

The service was what I remembered...shoddy and lazy...hell, it deteriorated since the last time--the day crew on a Sunday was even less professional than the evening crew on a week day. 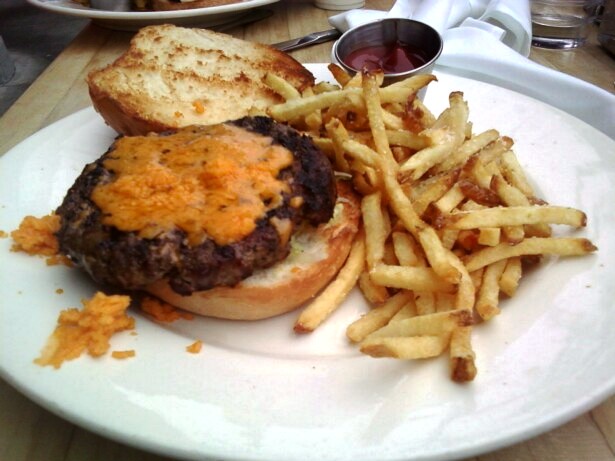 Aside from the service, the bun, and the fries, this was a damn good burger. It had deep and powerful beef and umami notes, and the cheese brought the whole thing together to the point where it was very nearly a great burger. The texture, bun aside, were fantastic.  I almost preferred this cheeseburger to the one at Comme Ça, because it was less oily and more manageable...the bun sunk it in this regard.

Burger Review : Damn, that was a tasty burger with enormous flavor.  Like Terry O'Quinn's John Locke character on Lost...this burger, and La Grande Orange, found some new life, but it continued to be tormented by persistent and pronounced shortcomings. Everything but the meat and cheese were awful.

Rating...3 Bites  If they manage to fix that bun, it will be a 5 Bites burger.  They need to fix the service and general cleanliness, because it's the right thing to do...seriously, it was nasty.  Fix the fries, because they are inedible.
Posted by Pete Neumann at Sunday, September 12, 2010