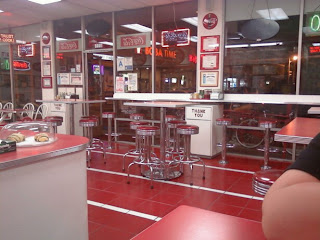 That's what the sign outside of the Hamburger Habit said. I had to try the best hamburger in So Cal for myself.  Happy Meal and I ordered the usual plain cheeseburgers and sat down to await the glorious goodness of the superlative burgers promised by the signage.
The interior was spotless uber-diner--red and white vinyl, tile, formica, and chrome. We listened to our burgers sizzling on the griddle as we waited and sipped our diet cokes. The place was festooned with awards, clever slogans, and Coca Cola paraphernalia.
The burger breakdown.... 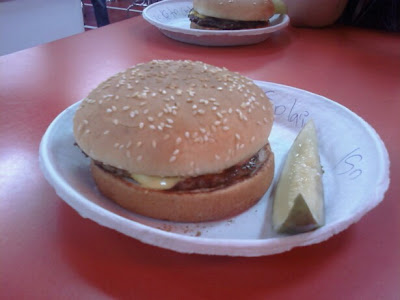 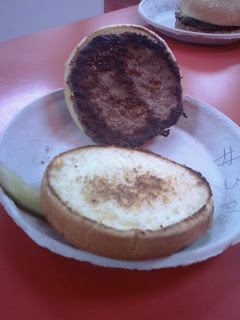 It seemed that the order of the day at Hamburger Habit was sanitation. The place was gleaming, and that cleanliness made it's way into the sterile taste of the food. Not even the hardiest thermophile could have survived the cooking process. The lad cried Uncle after eating about 1/3 of his cheeseburger. It was a poor use of 14 bucks.
Burger Review : Pass. This cheeseburger's quality ingredients and flavors were not able to stand up to the incompetent preparation.