Colonel Mustard, Side Of Fries, and I decided to celebrate Rosh Hashana  by eating something non-kosher, and non-kosher beef with dairy on top seemed like the way to go.

We headed off to Ketchy's II in Little Tokyo in Santa Monica--Asian girls are hot. Yes, there was a Ketchy's (I?), but that one was run over by an old, Japanese gardener, and they couldn't get the property re-zoned, so Ketchy's II was the only option....and now you know.

Ketchy's II is a classic, hamburger stand--outside seating only (8 seats at 4 tiny tables), so small that it barely warrants its own address, and only one or two guys can fit behind the ordering counter. 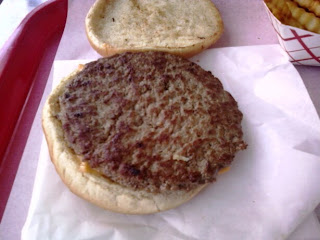 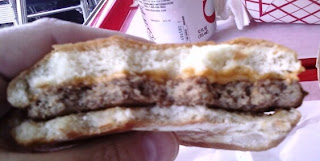 The fries were frozen, crinkle cuts, but they were fried hard and crispy, and the seasoning was just right--it was hard to stop eating them.

Did I mention that Asian girls are hot?