The users of both Yelp and Chowhound were in agreement that 26 Beach made a damn fine cheeseburger.  To top that, 26 Beach's staffers all wore shirts emblazoned with "The Best Burger in L.A."  They even posted that on their special board--no specials--just THE BEST BURGER IN L.A. The menus boasted this: "Famous Craftsman Hamburgers on housemade buns. No chef has been making Craftsman Burgers longer!"  I couldn't figure out what that meant, but it sounded fantastic.  Ready...Set...Terrible!

The Beef: The burger patty was  Angus Chuck It had been pre-ground somewhere far away. This was an 80:20 blend, which was more like 75:25.  Then again, mine had so much cartilage in it that it could have accounted for 5% of the mass.  I discovered that "best" and "Craftsman" were code for "oily" and "full of gristle."  After eating half of this thing, I gave up and sent it back.  There was gristle in every single bite.  In fairness they did take my food off of the bill. The beef tasted wet-aged, and it had almost no character in terms of flavor or texture. The coarsely ground, bland chuck was doughy and neutral.

The Sear: The grilled sear was competent and relatively thorough.  WIN.

The Seasoning: The burger patty was little salty on the outside, but it was bland, bland, bland on the inside.

The Preparation:  I requested Med-Rare, but I received Med-Rare...heavy on the Rare. This did not work with the insipid, soft, oily beef. It was odd, because the burger patty's cooked layer accounted for 1/3 of the depth, but the meat was still dead raw in the center.

The Cheese: This was a  relatively bland Cheddar--it added no tang or saltiness to the dish.

The Bun: The bun at 26 Beach was a competently toasted but very, egg-heavy brioche. It was much too chewy.  The chewiness of the egg and the sweetness from the bun completely overwhelmed the bland, loose, greasy beef. 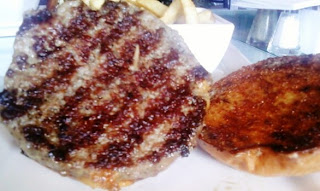 Meat To Bun Ratio: It seemed close, but the bun was a complete mismatch to the beef, so there really was not a good way to judge this factor.

The Fries: The fries were competently cooked, but they were not seasoned. Bland.

For a price of $13, this was a very poor burger  value--it was inedible. Best Burger in LA...really?  Most Gristle-Filled Burger in LA would have at least been truthful. It was a great way to stay in shape, though. Gnawing on gristle burned calories, and I sent most of it back. Maybe they should have marketed this ghastly thing as a diet burger. Again, they did comp the burger after the manager was shown the impressive gristle collection that I amassed from only 50% of my burger patty.

Burger Review : The cheeseburger at 26 Beach looked great and was competently prepared, but each of the components fell completely flat. Based upon this visit and the quality of the ingredients, I would not return.