Midtown Atlanta has undergone a bit of a renaissance in recent years. It was not long ago that the only worthwhile destination was the Cheetah, and being outside after dark was an ill-advised scenario. Things have certainly changed. Now there are brand new apartment homes, walking/biking paths, and plenty of bars and restaurants to satisfy even the most picky and annoying of the young urban hipsters.

One of the more renowned of these places is The Vortex Bar and Grill. Featured on the Travel Channel's Man vs. Food, the Vortex was a rather unique spot. It's like a Rockabilly shrine, with Mike Ness wannabes manning most of the battle stations and Suicide Girls posters on the walls. Often, such attention to gimmicks and decorations is a sure sign that the food is mediocre at best. Rest assured, Vortex put just as much love into its substance as it did its style.
Ugly Bag of Mostly Water (UBMW) was in town on business, so he and his co-workers thought it would be rude not to hit the Vortex, given its short walking distance from the office. Seating was immediately available, as it was still relatively early for a dinner seating. The menu revealed a wide range of dishes, including about twenty different burgers. Fear not, dear reader. For this, too, was indeed no negative indicator of food quality. The Vortex's burgers were half-pound sirloin patties, flame grilled to order. While your humble reviewer is normally a no-nonsense burger type -- meat, cheese, bread, and maybe a pickle, thank you -- he had to make an exception when he laid his eyes on the Coronary Bypass Burger. As described by their menu, it consisted of "Our big half-pound sirloin patty, topped with a fried egg, three slices of American cheese, four slices of bacon, with plenty of mayo on the side that we expect you to slather all over this burger. It comes with a side item too." Yes, please. When the burger arrived, UBMW realized that invoking the wrath of the burger purists on this site was a small price to pay for the meal he was about to enjoy. 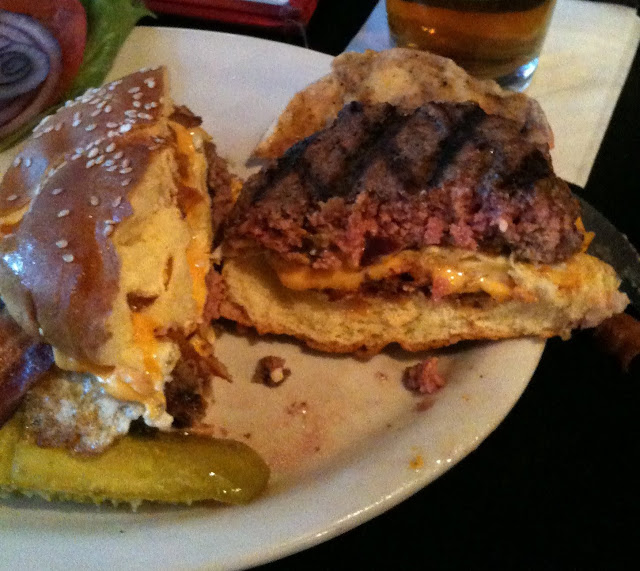 The skinny (irony intended): this was, as advertised, 8 ounces of sirloin, cooked perfectly to order. It seemed to be a bit leaner than the ideal 80/20 blends, but the Vortex's kitchen was adept at handling any burger meat. The bun was nice and firm, and was either an egg bread or a potato bread (egg is the best guess, given the lower density). You burger purists out there will be happy to know the first thing your reviewer did was sample just the meat, cheese, and bun. The meat was definitely of good quality, and had that strong flavor that is characteristic of sirloin. Given the cut of meat they use, though, it was also surprisingly tender. It was juicy (but not greasy), was cooked medium as ordered, and had a nice char and sear without drying out the outer parts of the patty. The American cheese melted nicely and was a perfect complement to the strong, sirloin flavor. If there was one criticism, and a minor one at that, it was that the patty seemed a touch too over-manipulated. The addition of the bacon and egg to the mix made a good thing even better. The egg was fried, Over Medium, and on top of it was a weave of four slices of meaty bacon. It was a delicious combination, so much so that UBMW didn't leave a single bite behind on the plate.
Other burgers: Ugly Bag's colleagues ordered fine selections such as the guacamole burger and the Elvis burger (that's right, topped with peanut butter and fried plantains). Both received rave reviews. While it is a serious violation of protocol, you are fully encouraged to sample one of their specialty burgers. You can be confident that flavor will be not overshadowed by gimmick.
Additional tip: try the potato salad. Instead of a traditional potato salad, they mixed the roasted potato pieces in with sour cream and chives.
Burger Review : They really cared about their food at the Vortex. Quality beef + quality other ingredients = win. It wasn't the best burger on the planet, but it was up there.
Rating...4 Bites
Posted by Sean H at Friday, September 17, 2010