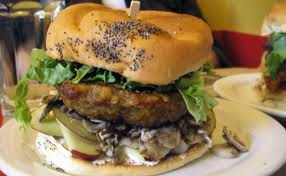 Let's face it, Montreal was a sick deal in the earlier part of this decade--it provided the value of Mexico, and the food and accommodations were amazing. It was like the entire country was throwing a half-price sale--it was even better. That's when I discovered La Paryse. Keep in mind that Montreal is not a great town for burgers--hell, Canada is not a great country for burgers. That said, La Paryse rocks out with its rooster out. That is one excellent burger. They do their best to screw it up with mayo and enough salad to feed a cow to make more burgers, but you can get them to leave all of that extraneous stuff off. Trust me, you don't

want it on this burger. What you'll get is that half salad/half burger mutant disaster, and it's a sloppy mess. See?

Bun, burger, cheese, mustard on the side.............done. What you have is a great burger--it's big enough--it's well-aged, perfectly seared, and juicy. This is the best burger that I've had in Montreal. While ranking burgers in Canada is sort of like ranking whores by their morality, this burger is worthy of the excruciatingly high standards of the Burger Busters.

Burger Review : The best GD cheeseburger in Canada. Also, I'm pretty sure that they have a picture of Dr. Zaius on their ten dollar bills--which is awesome.