OLiVES at the Via Bellagio Shops in Las Vegas -- HOLY Crap! 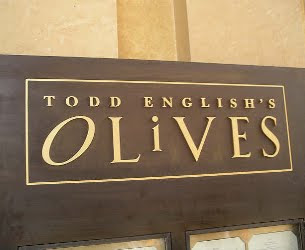 Hands down the best burger ever busted. I've been going there for several years, and I have never had anything less than an exceptional cheeseburger at OLiVES, and by "exceptional" I mean "fanfreakingtastic." Long after this civilization has fallen, they will still tell tales of the OLiVES Burger over camp fires and in space craft.  The OLiVES cheeseburger was the best thing in Las Vegas that was not sporting boobs.

The OLiVES Burger only happens at lunch, to the best of my knowledge, and it is well worth getting up for.

I started with the braised squid and octopus app, which was just sick--even if you don't like octopus, you will love this--the dish was transcendent--Enough GD seafood---- strap in for a burgergasm.

The Beef: This was about 10 ounces of dry-aged rib and sirloin fat cut back in for added flavor and moisture.  It was all juiciness, blood, funk, and beefy steak flavors with plenty of iron to round out the flavor profile. Dijon mustard only (if anything) with this burger. If I catch you eating it with ketchup, I will show up with an ass whipping.

The Preparation: The proprietary blend was ground to medium coarse to preserve the steak textures. Very delicate pressure was applied when forming the large patties, and this created a toothsome but not chewy burger. Med Rare is the only way to go, and they have always nailed it.


The Sear: OLiVES delivered a perfect, deep, sear from a hot, gas-fired grill. The burger had a perfect salty crust and was just juicy enough to saturate the bun with blood and juice without overloading it and making it soggy.
The Seasoning: The beef was nicely and evenly seasoned inside and out.
The Bun: The bun was a sweet, moist, just chewy enough, toasted brioche.
The Cheese: What they provided was a salty, rich, and creamy, Vermont, white cheddar. This was melted/draped over the burger to provide a perfect mouth feel.
The Meat to Bun Ratio: This was so precise that the very last bite left my fingers dry with a cohesive bite of meat and bun, which had the same mouth feel as the first. The burger patty was sized exactly to bun so that every bite contained the same portion of meat and bun. It was like Todd English set up a lab in the back and had engineers with calipers creating the food.
The Fries: Sweet gawd---the fries!  They were like savory, crispy packages of mashed potatoes with truffle oil and Parmesan---so good.  They were thick cut steak fries, which were battered in Parmesan and cooked in properly hot oil.

The Value: I have taken at least 15 people to Olives and all of them swore that it was the best burger that they have ever eaten. That made $18 ($25 with shaved truffles) a small price to pay.

Editor's Note: This burger was re-reviewed on 07JUN11 after OLiVES changed chefs and beef. The result was an unfortunate slide into the Average range. This is now a 3 Bites burger. The price was reduced for $18 for the standard burger and $20 for the truffled cheese burger, but since the quality had decreased appreciably, the value was still not commensurate. The beef was tasty but far too oily, and the once glorious fries were reduced to a shadow of their former greatness.